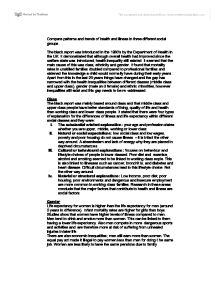 Compare patterns and trends of health and illness in three different social groups.

Compare patterns and trends of health and illness in three different social groups. The black report was introduced in the 1980's by the Department of Health in the UK. It demonstrated that although overall health had improved since the welfare state was introduced, health inequality still existed. It seemed that the main cause of this was class, ethnicity and gender. It found that mortality rates in unskilled families doubled compared to professional families and widened the knowledge a child would normally have during their early years. Apart from this in the last 20 years things have changed and the gap has narrowed with the health inequalities between different classes (middle class and upper class), gender (male and female) and ethnic minorities, however inequalities still exist and this gap needs to be re-addressed. Class The black report was mainly based around class and that middle class and upper class people have better standards of living, quality of life and health than working class and lower class people. ...read more.

Research in these areas conclude that the major factors that contribute to health and illness are social factors Gender Life expectancy for women is higher than the life expectancy for men (around 5 years in difference). Infant mortality rates are higher for girls than boys. Studies show that women have higher levels of illness compared to men. Men tend to drink and smoke more than women. This can be linked to them having a lower life expectancy. Also men compete in more dangerous sports and activities and are therefore more at risk of suffering from unhealed injuries in later life. There are also economic inequalities; men still earn more than women. The equal pay act made it illegal to pay women less than men for doing the same job. Women are less likely to have the same pensions due to family responsibilities. There is a clear link between poverty and poor health, and therefore women are more at risk of health issues that they can not afford to deal with. ...read more.

Racism is and can become very stressful and can result in conflict between people and the person who is being victimised, have problems to deal with such as emotional stress. Workers in health centres understand religious and cultural beliefs but there is a chance that some may not meet the needs of the patient. In 2001 census revealed that 342,032 people aged 65+ have over 50 hours unpaid heath care every week. 60% of people aged 65-74 and 64% of people over 75 seem to have a long-standing illness. 24% of people over the age of 75 attended hospital for different reasons There are regional variations in patterns if health and illness. Mortality rates and mobility rates are different in other areas of the country in the UK. For example within England, lung cancer is above average in North West, Northern, and Yorkshire Regions and below average in the South Western, Southern and Eastern Regions. This shows that mortality rates and mobility rates are higher in different areas in the country. ...read more.