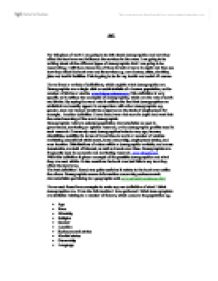 Demographics - how they affect the local area and influence the services in the areas.

Ao1 For this piece of work I am going to be talk about demographics and how they affect the local area and influence the services in the areas. I am going to be writing about all the different types of demographics that I am going to be researching. I will then choose two of them to look at more in depth and then see how they affect the local area and its services e.g. care homes, clubs, charities, jobs and health facilities. This is going to be for my health and social A2 course. I have found a variety of definitions, which explain what demographics are. Demographics are a single vital or social statistic of a human population, as the number of births or deaths. www.dictonaryreference.com. This definition is very specific as it outlines two examples of demographics, which are the rate of death and births. By saying the word rate it outlines the fact that demographics are statistical and usually appear in comparison with other demographics e.g. gender, men and women would be compared on the basis of employment for example. Another definition I have found was a lot more in depth and went into the actual meaning of the word demographic. ...read more.

This is a small number compared to the 63,870 disabled people in total therefore mental disabilities do not seem to be an issue. I also managed to find statistics on mental disabilities (from April 02 to March 03 census) with men and women in Kent. I will present this in a table. Men Women 2270 2465 This shows that overall by a small percentage that there are more females with mental illnesses. (All statistics taken from www.neighbourhood.statistics.gov.uk and www.wikipedia.com) As well as specific types of disability in Kent I also was able to find trend data. Canterbury Kent South East August 06 5660 63 870 259340 August 05 5500 61690 251570 August 04 5350 58780 240970 August 03 5050 55380 228380 August 02 4750 51730 215020 This table (www.neighbourhood.statistics.gov.uk) shows the trend between the years and the rate of disability. It shows that the rate of disability has risen from 2002 up to 2006. This could be for a number of reasons e.g. improved service for disabilities in the local area or technology is getting better at diagnosing. Due to the fact that Herne Bay has a high percentage of residents over the age of 65 (www.wikipedia.com and 2001 census) ...read more.

This is quite a small number of people, however 13% are part time and 9% self-employed. Only 3% of people are unemployed in Herne Bay and that is quite a small percentage. There is a high percent of people unemployed because they are retired in Herne Bay and that is 18%. That is the second highest percentage of employment rate in Herne Bay and it's a large percentage at that. 6% of people in the local area are put out of work for disability or sickness. (Source www.wikipedia.com) Here I have made a table to show percentages according to Wikipedia about the percentages of people and the sectors they work in Health and Social Manufacturing Construction Real estate Education Transport Comm. Other 14% 11% 10% 9% 8% 8% 5% 20% This shows that apart from other career choices (all under 1%) health and social is the most worked in sector in Herne Bay. For unemployment in the area of Herne Bay there is plenty of opportunities as there is 47 care homes and disabled peoples homes to work in. as well as that Herne Bay is home to a job centre which helps people recruit people. The care homes use means of the Herne Bay Gazette and job centre to recruit new people to work in these homes. Therefore as well as the other sectors in Herne Bay it provides a good basis for employment. ...read more.