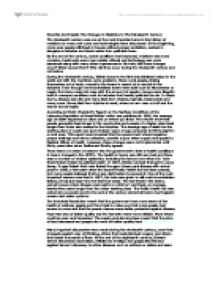 Describe And Explain The Changes In Medicine In The Nineteenth Century.

Describe And Explain The Changes In Medicine In The Nineteenth Century The nineteenth century was one of the most important eras in the history of medicine as many new cures and technologies were discovered. At the beginning, many poor people still lived in houses without proper sanitation, worked in dangerous factories and drank water from polluted rivers. By the end of the century, social conditions had improved, medicine was more complex, treatments were more widely offered and technology was more advanced along with many other improvements. But why did these changes occur? What caused them? Why did they occur during the nineteenth century and not before. During the nineteenth century, Britain became the first industrialised nation in the world and with the machines came problems. Many rural people, finding themselves out of work, moved to the towns in search of a new job in the factories. Even though new industrialised towns were built such as Manchester or Leeds, the towns could not cope with the amount of people. Houses were illegally built in cramped conditions next to factories that heavily polluted the air. In these slums, disease was rife and many died from cholera, typhoid, tuberculosis and many more. Some died from injuries at work, where an arm was cut off and the wound turned septic. According to Edwin Chadwick's 'Report on the Sanitary Conditions of the Labouring Population of Great Britain' which was published in 1842; the average age of death depended on class and on where you lived. ...read more.

In 1844, an American dentist used it and in 1874, James Simpson, a surgeon from Edinburgh began to use chloroform in operations. Chloroform worked better than laughing gas but unfortunately, doctors were not always sure how much to give to their patients. As a result, many died from an overdose of chloroform. In 1853, Queen Victoria was given chloroform for the birth of her eldest. It was successful and the drug became more widespread.coec ecr seececw orec eck inec foec ec. Dr. Ignaz Semmelweiss was a doctor who proposed the theory that disease was spread on the hands of doctors when going from one person to another. He insisted that doctors and students should wash their hands in calcium chloride between treating patients. The death rate dropped dramatically in his ward from twelve percent to just one percent. Despite the success of Semmelweiss's discovery, many doctors opposed him and high death rates from infections in hospitals continued.cocg cgr secgcgw orcg cgk incg focg cg. Wound infection was a major problem in the early nineteenth century and of those who managed to survive the operation a number died from wounds turning septic and becoming infected. Joseph Lister was Professor of Surgery at the university in Glasgow from 1860 and it was in 1865 that he came across the research of Pasteur that showed that micro-organisms in the air turned wine sour. Lister immediately connected microbes in the air and the blood poisoning in wounds that was killing people. ...read more.

After cleaning the wound of an 11 year old boy and covering it in a dressing of carbolic acid, he decided that it must have killed the germs because the boy had survived and did not suffer from infection. This was very significant because it meant that surgery could be carried out without the constant fear of the patient dieing from infection.cofc fcr sefcfcw orfc fck infc fofc fc; During the 20th century the medical knowledge and understanding moved on at a much greater pace, many more break-throughs were occurring in the field of medicine which meant more lives were being saved. New techniques meant that surgery could be performed much more safely and regularly without the constant risk of death. The introduction of the National Health Service provides people with access to medicine and health care. Although medical advances are still being made rapidly, not all medical problems have been solved. AIDs still remains a life threatening illness with no known cure. The completion of this essay shows that throughout the past 3000 years there have been many bursts of progress, however there have also been some periods of regression (for example 400-500AD). Progress was slow until about 1400AD. Things seemed to get much better as religion declined as a big influence on people's lives. Technology, science and education have all been factors influencing the rate of change in medicine. However overall the pace of progression has become more rapid. Medical progress changes as attitudes change, which predicts that there will be many more advances in the field of medicine in the near future. ...read more.