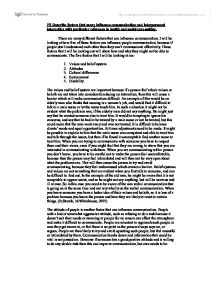 Describe factors that many influence communication and interpersonal interaction with particular reference to health and social care setting.

P3-Describe factors that many influence communication and interpersonal interaction with particular reference to health and social care setting. There are many different factors that can influence communication. I will be looking at how five of those factors can influence people communication, because if people don't understand each other then they can't communicate effectively. These factors that I will be looking out will show how and why they might not be able to communicate. The five factors that I will be looking at are: 1. Values and belief system 2. Attitudes 3. Cultural differences 4. Environment 5. Disability The values and belief system are important because if a person feel's their values or beliefs are not taken into consideration during an interaction, then this will cause a barrier which will make communication difficult. An example of this would be an elderly man who thinks that nursing is a woman's job, and would find it difficult to talk to a male nurse or let the nurse touch him. In such a situation it might not be evident what the problem was, if the elderly man did not say anything. He might just say that he wanted someone else to treat him. It would be tempting to ignore his concerns, and say that he had to be treated by a male nurse or not be treated, but this could mean that the man went away and was not treated. ...read more.

While I was at my work placement, I was careful to talk to the children in an appropriate manner by being polite and listening to what they were saying. Even if I was busy with another task, I would put that task on hold while they were speaking. I would make a comment on what they had just said to show that I had been listening, and let them finish saying what they wanted to say rather than jumping in and finishing the sentence for them, so that they knew I was interested in what they were saying and was not rushing to get on with another task. (B.Stretch, M.Whitehouse, 2007) When you are trying to communicate with people who are from a different culture you have to think about the way you speak to them and that they may have different belief systems and values. When you are speaking to people who can't speak English (as they could be from another country where it is traditional to speak only one language) very well then you should think about how you say things, for example slang wouldn't be advisable to use, because they would not understand it. Also need to use simple clear language rather then complicated or technical words, or words that can have several meanings because they probably only learn the precise meaning for the word. ...read more.

This shows the importance of the environment you have when trying to communicate with someone. (B.Stretch, M.Whitehouse, 2007) Disability can be a problem when communicating. Initially there are the problems of assumptions and stereotypes. So just because someone is in a wheelchair and has a carer, it is easy at times to forget the person in the wheelchair and ask the carer what the person wants rather than talking directly to the person in the wheelchair, who could well be physically disabled rather than mentally disabled. It can also mean that you need to make special arrangements to communicate with the person. At the nursery for example there was an autistic child who had a communication passport which contained details of what the child liked and disliked. Inside the passport there was a set of pictures of things like food, so it was possible to ask the child if he wanted fruit by pointing at the card, or a specific piece of fruit like an apple. The child was not to talk properly but was able to use non verbal language to communicate what he wanted sometimes. If he wanted you to read him a book, he would pick up a book and bring it to you and try and make you take it. If someone did not know he had a disability it would be easy for the person to misinterpret the child's actions. (B.Stretch, M.Whitehouse, 2007) ?? ?? ?? ?? ...read more.