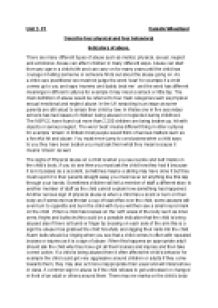 ﻿Unit 5 P1 Danielle Wheatland Describe four physical and four behavioral Indicators of abuse. There are many different types of abuse such as mental, physical, sexual, neglect and emotional. Abuse can affect children in many different ways. Abuse can start from any age in a child?s life and can carry on for many years until the child has courage in telling someone or someone finds out about the abuse going on. As a child care practitioner we must not judge the word ?beat? for example if a child comes up to you and says ?mummy and daddy beat me? and the word has different meanings in different cultures for example it may mean a smack or little tap. The main definition of abuse would be referred to four main categories such as physical sexual emotional and neglect abuse. In the UK smacking is an issue as some parents are still aloud to smack their child by law. In Wales one in five secondary schools has had issues of children being abused or neglected during childhood. ...read more.

Alarm bells should be ringing when you see that a child comes in often with repeated bruises or injuries as it is a sign of abuse. When this happens an appropriate adult should ask the child why they have got all them bruises and injuries and then take correct action. If a child is being abused then it often affects the child?s behavior for example the child could get very aggressive around children or adults if they come towards them, they may also act more inappropriate than usual and will miss behave in class. A common sign In abuse is if the child refuses to get undressed or changed in front of an adult or others around them. There may me marks on the child?s body what an abuser may have left and the child may be scared that someone will see them and they don?t want to be asked questions because sometime the abuser will threaten the child saying do not tell anyone or they will hurt them again. ...read more.

signs or indicators that a child is being abused then you must always talk to a suitable adult preferably a member of staff. There are many consequences of abuse such as the child maybe unscarred by the abuse that they have suffered, but some are able to deal with some of the things they have suffered and experienced and will move on to a more positive lifestyle. For the ones that have suffered really badly by the effect that it has caused their future will be different as they may be diagnosed with depression and may isolate themselves from others. The consequences of child abuse can both be long term and short term, it all depends on the child?s choice and their level of achievement they reach. Every child as an individual are different and some may have been more affected than others, therefore some children may take a while to forget about their past, some children will gain confidence and self esteem after telling someone about the abuse but some may be too scared to go near someone in case something bad happens to them again. ...read more.