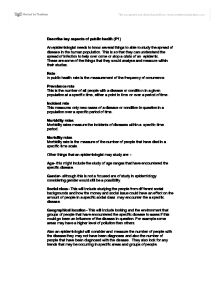 Describe key aspects of public health (P1) An epidemiologist needs to know several things to able to study the spread of disease in the human population. This is so that they can understand the spread of infection to help over come or stop a crisis of an epidemic. These are some of the things that they would analyse and measure within their studies. Rate In public health rate is the measurement of the frequency of occurrence. Prevalence rate This is the number of all people with a disease or condition in a given population at a specific time, either a point in time or over a period of time. Incident rate This measures only new cases of a disease or condition in question in a population over a specific period of time. Morbidity rates Morbidity rates measure the incidents of diseases within a specific time period. Mortality rates Morbidity rate is the measure of the number of people that have died in a specific time scale. Other things that an epidemiologist may study are:- Age- this might include the study of age ranges that have encountered the specific disease. Gender- although this is not a focused are of study in epidemiology considering gender would still be a possibility. Social class- This will include studying the people from different social backgrounds and how the money and social issue could have an effect on the amount of people in a specific social class may encounter the a specific disease. Geographical location- This will include looking and the environment that groups of people that have encountered the specific disease to asses if this could go been an influence of the disease in question. For example some areas may have a higher level of pollution then others. Also an epidemiologist will consider and measure the number of people with the disease they may not have been diagnoses and also the number of people that have been diagnosed with the disease. ...read more.

Organisations such as the world health society have put into place prevention and control measure on possible out breaks of cholera. They believe that the importance of medium- and long-term prevention activities in cholera control should be empathised as current responses to cholera outbreaks tends to be reactive, in the form of an emergency response. While this approach prevents many deaths, it fails to prevent cases of cholera. On the other hand diseases that have increased in today's society are cancer, coronary health disease and stroke. These add up to two thirds off all deaths as they are not jus disease that kill people but are major causes of death in society. Across the population health and life expectancy is not shared equally across the population but we are all living longer lives. Other links in today's society to health status are things such as inequalities. It is argues that people that have a higher class therefore earning more money will have better health them people that are in these classes and have low funds. This is due to the lifestyles that come with the classes. For example people that have more money will have be able to buy healthier foods were as people with less money wont care so much about the food content but simply being able to feed themselves and there children. Also environmental factors can have an effect on people health. For example some people may live in highly polluted area or parts the world were water in contaminated. This can lead them to developing disease and subjected to more health issues then people that don't live in these areas. All patterns of ill health can from within smaller groups due to genetically passed diseases such as diabetes. This can be passed down through families crating patterns within there family of ill health conditions. In the 1970s mortality rates among within men of the working age were almost as high as unskilled groups as there were for professional groups. ...read more.

The prevention diabetes usual involves around leading a healthy lifestyle such as maintain a balance diet with low sugar and fat intake. If diabetes regular pattern within a family these are the precautions advised to do to reduce their chances of getting the disease. Due to the rise in diabetes and the significant number of people that have it organisation such as the NHS have programmes witch focus on tackling and managing people with diabetes. NHS aim to * Prevent type 2 diabetes * Identify people with diabetes * Empower people with diabetes * Clinical care for adults with diabetes * Clinical care for children and young people with diabetes * Manage of diabetic emergencies * Care for people with diabetes during admission to hospital * Monitor and reduces Diabetes and pregnancy * Detect and manage long-term diabetes Local chemist and doctor offer free blood tests for assessing a person's blood sugar levels. Intern this is a good measurement for assessing people that may have diabetes and also alarming people if they are in risk of getting it due to high blood sugar levels. People diagnosed with diabetes are given a specialist diets by their doctors but usual a well balance diet is recommended avoiding large intakes of fatty and high sugar foods. People that are overweight are advised to decrease their weight as part of their treatment. Insulin injections are giving to people with type1 diabetes and some type2 diabetes. They increase the amount of insulin being produced within the body which brings down the blood sugar level. Other medications stabling diabetes are tablet formed witch can increase the amount of insulin, delay absorption of glucose, supress glucagon or increase the action of insulin. These treatments for individual depend on the type of diabetes and conditions the patient has. Managing diabetes consists of routine and annual check-ups by a doctor. This determines if the treatment the person is receiving is working and also looks out for any other condition that can come to complication due to their diabetes. ?? ?? ?? ?? ...read more.