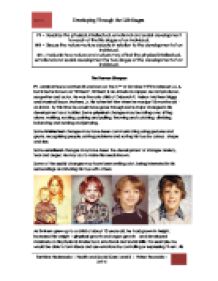 Describe the physical, intellectual, emotional and social development for each of the life stages of an individual. Examples from my life and from Eminem's

P1 - Describe the physical, intellectual, emotional and social development for each of the life stages of an individual. M1 - Discuss the nature-nurture debate in relation to the development of an individual. D1 - Evaluate how nature and nurture may affect the physical intellectual, emotional and social development for two stages of the development of an individual. The Human Lifespan P1 -Marshall Bruce Mathers III was born on the 17th of October 1972 in Missouri U.S.A, but is better known as 'Eminem'. Eminem is an American rapper, record producer, songwriter and actor. He was the only child of Deborah R. Nelson Mathers-Briggs and Marshall Bruce Mathers, Jr. His father left him when he was just 18 months old - an infant. By this time he would have gone through some major changes in his development as a toddler. Some physical changes may be rolling over, sitting alone, walking, rocking, pushing and pulling, throwing and catching, climbing, balancing and running and jumping. Some intellectual changes may have been communicating using gestures and grunts, recognising people, solving problems and sorting his toys by colour, shape and size. Some emotional changes may have been the development of stranger anxiety, fear and anger. He may cry to make his needs known. Some of the social changes may have been smiling a lot, being interested in his surroundings and sharing his toys with others. As Eminem grew up to a child of about 10 years old, he had grown in height, increased his weight - physical growth and organ growth - and developed massively on his physical, intellectual, emotional and social skills. For example, he would be able to form ideas and use emotions by controlling or expressing them. His socialization skills would have increased primarily by family and close friends and secondarily by the media, TV and radio. Eminem and his mum moved several times when he was a child. ...read more.

My condition prevented me from being active and I couldn't be in dusty places or wherever the hover was on. Fortunately, the condition left me at the age of seven and I did not have any other conditions which had an impact on my life. Adolescence: Luckily, I was healthy from the age of 12 till now. However, at times I do feel out of breath and overly-exhausted after a short period of exercise. I think this may be caused by my medical history of having asthma. Environment Childhood: I grew up in a little village in Holland. It was very quiet which was good as most of the people there were old. There was no overcrowding which lead to enough privacy and no noise. The housing was excellent and there was barely crime in the neighbourhood. There was no pollution or traffic and there were enough facilities such as shops and parking. However, the village was mainly populated by white people. There were only several foreign families and we all had connections with each other due to us being the minority. This lead to us being the victim of racism and getting discriminated against at times as people there weren't used to seeing people from other nationalities. Adolescence: When I was 13, I moved to London with my family. This was a very hard thing to do as I had to leave my friends and some family in Holland. It took me quite some time to get used to the environment as London is busy and the people here are so different. I felt like I had to start from zero because the schools and the way of teaching here was something I was not used to. Social and Economic Circumstances Childhood: My dad used to be the only one working in the house and my mum used to be a housewife. Because my siblings and I were all small, we didn't have many expenses so my family did well on keeping financially stable. ...read more.

Breathing becomes harder as the blood is not being pumped around the body efficiently. The strength and the efficiency of the chest muscles and the lungs deteriorate which can lead to the development of chronic diseases. Examples are Bronchitis, Emphysema and COPD - Chronic Obstructive Pulmonary Disease. The heart becomes less efficient in the process and pumping the blood around the body. Arteries may narrow and can lead to 'clogging up' which hardens the arteries. This can have an impact on the blood pressure which can rise and then lead to either a stroke or a heart attack. The musculoskeletal system of the body gets affected as well. Muscle thinning, arthritis and a decline in mobility are results from ageing. As a human being ages, their skeletal muscles start to shrink. This tends to happen after the age of 40. Muscle thinning mainly occurs in people with a lack of exercise. The absorption of food and nutrients also becomes less efficient in older people and this includes minerals, vitamins, fibre and iron. This may lead to malnourishment. As we age, a substance called 'cartilage' thins and becomes less elastic. Cartilage covers the end of our bones and works as a cushion on our bones as we move. This can lead to arthritis which includes stiffness and pain in hips or knees when moving. The elasticity of our skin also reduces as the fat which is stored under the skin decreases. This can develop wrinkles. Too much exposure to sunlight -ultraviolet rays- can also cause damage to the skin. The ability of our sense organs also decreases as we grow older. The lenses in the eyes become hard and cloudy and the sensitivity of our nerve cells in the inner ear decrease which may result in hearing loss. ?? ?? ?? ?? Unit 4 Developing Through the Life Stages Tamkine Hederzada | Health and Social Care Level 3 | Vivien - Unit 4 10 Tamkine Hederzada | Health and Social Care Level 3 | Vivien Reynolds - Unit 4 1 ...read more.

This report covers a lot of different topics all mainly relating to the PIES and development through life stages. The report itself shows an good level of understanding of the PIES and how certain factors can affect ones development. The lack of detail in some sections is however a weakness, and also clarifying opinions should be made by including research and references at the correct points within the report ***