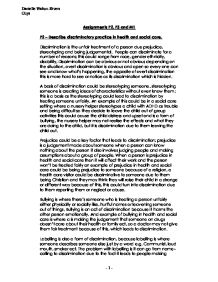 Describe the potential effects of discriminatory practice on those who use health or social care services.

Assignments P2, P3 and M1 P2 - Describe discriminatory practice in health and social care. Discrimination is the unfair treatment of a person due prejudice, stereotyping and being judgemental. People can discriminate for a number of reasons; this could range from race, gender ethnicity, disability, Discrimination can be obvious or not obvious depending on the situation, overt discrimination is obvious and open so every one can see and know what's happening, the opposite of overt discrimination this is more hard to see or notice as its discrimination which is hidden. A basis of discrimination could be stereotyping someone, stereotyping someone is creating ideas of characteristics without even know them; this is a basis as the stereotyping could lead to discrimination by treating someone unfairly. An example of this could be in a social care setting where a nursery helper stereotypes a child with ADHD as trouble and being difficult so they decide to leave the child out of group activities this could cause the child distress and upset and is a form of bullying, the nursery helper may not realise the effects and what they are doing to the child, but it is discrimination due to them leaving the child out. Prejudice could be a key factor that leads to discrimination; prejudice is a judgement made about someone when a person can know nothing about the person it also involves judging people and making assumptions about a group of people. ...read more.

Marginalisation is also a consequence of discrimination. Marginalisation is when individual or group are treated unequally or insignificantly, the effect of this on the person and discrimination is that it has effects such as withdrawal distrust in people, this can cause social, emotionally and health problems because depending on the person they could be scared of getting discriminated against so don't go to doctors or health and social care professionals though fear of getting discriminated against. Cycle of disadvantage can be an effect of discrimination because some of the basis of discrimination is singling people out and not giving them the same opportunities of everyone else this also links in with restricted opportunity because it means that people are getting 'left out' and mistreated, however some people may get a cycle of disadvantage and restricted opportunity because they feel to insecure of withdrawn to be involved in things or seek help because that's the effect discrimination has had on them socially and emotionally. Another effect of discrimination could be the loss of rights, this is because one people could be stereotyped and discriminated against because they've had drug and alcohol problems so deemed unsafe for their children, this could result in the parent losing parental right and responsibly so that right is taken away by law when in actual fact the person is a good parent and doesn't let drugs and alcohol effect that. ...read more.

and report unequal practice, the office and section the social worker works the manger of the group could assign each of the employees with a mentor and someone they mentor so that everyone has a person to go to if they have worries or queries, also it's against the law to discriminate against a person so, the person will then need to go under investigation and if its proved, they would end up getting 'fired'. A final example of discriminatory practice is in a hospital where a person is discriminated against because of they have been involved in drugs and smoking, the doctor refuses to give adequate treatment because they have stereotyped the person and believed that they don't care about their health or family. The effect on the person could have serious consequences on the person health, because the person's confidence and trust in health professionals might be knocked so they feel unable to ask for help, this could lead to and illness becoming worse or developing life threatening illness. Discrimination in this form could be prevented by doctors having courses in how to treat people in situations like this, by learning about these kinds of situations a person can be treated fairly and equally, doctors should also be put under investigation if an accusation or belief of discrimination or unfair treatment of any kind appears to be taking place. ...read more.

Overall this piece of work contains some good example of discrimination and the effects of such behaviour on service users. However, there are quite a few instances of poor grammar which makes the intended meaning of some parts unclear at times.
3/5