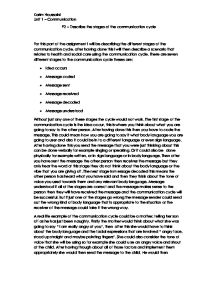 Describe the stages of the communication cycle

Then after you have sent the message the other person then receives the message but they only hear the word at this stage they do not think about the body language or the vibe that you are giving off. The next stage is message decoded this means the other person has heard what you have said and then they think about the tone of voice you used towards them and any relevant body language. Message understood if all of the stages are correct and the message makes sense to the person then they will have received the message and the communication cycle will be successful. But if just one of the stages go wrong the message sender could send out the wrong kind of body language that is appropriate to the situation or the receiver of the message could take it the wrong way. ...read more.

She could also consider the tone of voice that she will be using so for example she could use an angry voice and shout at the child. After having though about all of those factors and implement them appropriately she would then send the message to the child. He would then perceive the message but would only hear the words "I am really angry at you", at this stage. The child would then look at the anger in his mums face and see that she is pointing at him and can tell she is angered. After this stage is done the message is received and the cycle would start again, and the child would be able to send a message back to his mother. Below is a visual representation of the communication cycle http://www.elliemae.com/newsletter/february2006/images/sub_communicationcycle.gif ?? ?? ?? ?? Karim Houssaini Unit 1 - Communication ...read more.

This has the makings of a very good essay but I feel it is a little unbalanced at the moment. The writer has given some good and strong explanations for the legalising of drugs but has not really applied the same work to the disadvantages.

The work could be easily extended if further investigation went into the disadvantages. It would also benefit from some statistics and references.