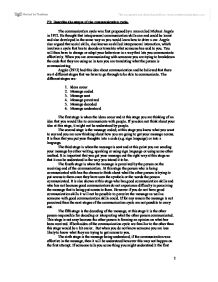 P2: Describe the stages of the communication cycle. The communication cycle was first proposed by a man called Michael Argyle in 1972. He thought that interpersonal communication skills can and could be learnt and also developed in the same way as you would learn how to drive a car. Argyle also argued that social skills, also known as skilled interpersonal interaction, which involves a cycle that has to decode or translate what someone has said to you. You will then have to change or adapt your behaviour in a way that lets you communicate effectively. When you are communicating with someone you are trying to breakdown the code that they are using so in turn you are translating what the person is communicating. Argyle (1972) had this idea about communication and he believed that there are 6 different stages that we have to go through to be able to communicate. The different stages are: 1. Ideas occur 2. Message coded 3. Message sent 4. Message perceived 5. Message decoded 6. Message understood The first stage is when the ideas occur and at this stage you are thinking of an idea that you would like to communicate with people. ...read more.

(Notes from class) Gerard Egan (1986) believes that empathy is important in communicating and understanding someone's feelings. It is important for a social worker or a carer to express empathy, because it is an effective way of supporting an individual. Egan defined empathy as an ability to enter into and understand the world of someone an else and communicate this understanding to him or her. By doing so a carer is able to understand the emotions associated with another person's situation and offer advice by looking beyond their own assumptions. (B.Stretch, M.Whitehouse, 2007) Different ethnic groups, teenagers and different cultures have their own special words, phrases and speech patterns that they use when they meet with their groups. These different communities and groups can create unconscious barriers to effective interpersonal interaction, for those who are not of the same group or community. SOLER is an example of a type of interpersonal interaction which was developed by Egan (1986). He developed this for remembering the importance of non-verbal communication during the listening process. (Notes from class) S- Sitting squarely O- Open position L- Lean slightly towards the patient E- Eye contact R- Relax Sitting squarely means sitting opposite to the person who is being listened to, rather than sitting next to them. ...read more.

I was able to observe Tuckman's theory of group communication on my placement at the Bath House nursery. The nursery had decided to put on a Christmas play based on a book called 'The stickman'. I had to help to separate the kids into two groups and took one group into another room to rehearse for the play. Although most of the children knew each other, they had not been in this group before. The play worker decided on the roles for each of the children. Some of the children started arguing about the roles that they had been given. The play worker was quite skilful in distracting the children and making other roles in the story sound more exciting than the role they were arguing over. This lead to gradual agreement over the roles, the Norming stage where they were happy with the roles they had and eager to start rehearsing, the final performing stage of Tuckman's theory. Because the group only came together for a short while, there wasn't enough time for them to identify with the group values in the performing stage. Also when they re-joined the other group, there was no real sense of identity with the group that they had just practiced with. ?? ?? ?? ?? 1 ...read more.