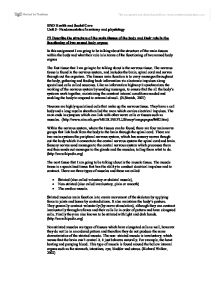 BND Health and Social Care Unit 5- Fundamentals of anatomy and physiology P2 Describe the structure of the main tissues of the body and their role in the functioning of two named body organs In this assignment I am going to be talking about the structure of the main tissues within the body and what their role is in terms of the functioning of two named body organs The first tissue that I am going to be talking about is the nervous tissue. The nervous tissue is found in the nervous system, and includes the brain, spinal cord and nerves through out the organism. The tissues main function is to carry messages throughout the body, gathering and feeding back information via electronic impulses along specialised cells called neurones. Like an information highway it synchronizes the working of the nervous system by sending messages, to ensure that the all the body's systems work together, maintaining the constant internal conditions needed and enabling the body to respond to external stimuli. (B.Stretch, 2007) Neurons are highly specialised cells that make up the nervous tissue. They have a cell body and a long myelin sheath called the axon which carries electrical impulses. The axon ends in synapses which can link with other nerve cells or tissues such as muscles. ...read more.

Also this kind of muscle also gives the stomach its smooth appearance as it does not lie in an ordered pattern. This muscle also provides the stomach with its layered wall, which helps to cushion the stomach and prevents injury. The cardiac muscle can only be found in the four chambers of the heart. It is a type of involuntary muscle which means that it can not be controlled. Cardiac muscle shares similarities in the structure of the skeletal muscle due to its striated appearance and contraction. Each cell consists of a central nucleus and is both horizontally and vertically striped. (http://en.wikipedia.org) The next tissue that I am going to be talking about is the connective tissue. These types of tissues are widely distributed throughout the body and they lie beneath the epithelial tissue, connecting and binding together all types of tissue. Connective tissue has fairly few cells which are separated from each other by intercellular ground substance (matrix) which is secreted by the cells. The matrix is made up of liquid, solid, or connective tissue. Inside the matrix are different sorts of connecting fibre e.g. collagen and elastic fibre. The function of the connective tissues is supporting, binding, covering and protecting other tissues. (http://www.geocities.com) There are many kinds of connective tissues such as, the bone, cartilage, areolar, adipose and blood. ...read more.

This tissue is specialised to form the covering of body lining of all internal and external body surfaces. These kinds of tissues can be divided into two groups depending on the number of layers that it has. An Epithelial tissue which is only one cell thick is known as Simple epithelia. If it consists of several layers then it is known as Compound Epithelia. (Richard Walker, 2002) Simple epithelia tissues have three types and these are squamous, cuboidal and columnar. (Richard Walker, 2002) Squamous cells consist of a single layer of flat cells. It allows materials to pass through it via osmosis and diffusion and it can be found in walls of lung alveoli and blood capillaries. (Richard Walker, 2002) Cuboidal cells consist of cube-shaped cells that secrete and absorb substances and they can be found in the kidneys, sweat ducts, thyroid glands and breast tissue. Columnar cells are tall cells with slightly oval nuclei. They secrete mucus, traps unwanted particles like carbon and the cilia helps to move substances towards the exterior. These cells can be found in the lining of the trachea, bronchi and the villi in the small intestines. (Richard Walker, 2002) Compound epithelia tissues consist of several layers of cells, which vary in shape. The deepest layers are column-shaped and the surface area layers are flattened. This tissue forms the layer of the mouth, tongue and oesophagus (the tube which transports food from the mouth to the stomach). (Richard Walker, 2002) ...read more.