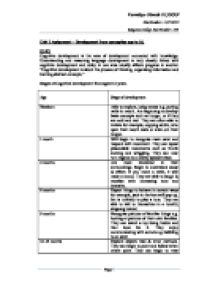 Development from conception age to 16. Theories of development and my observation of a child

Unit 2 Assignment - Development from conception age to 16. E1/E2 Cognitive development is the area of development connected with knowledge. Understanding and reasoning language development is very closely linked with cognitive development and delay in one area usually affects progress in another. "Cognitive development is about the process of thinking, organising information and learning abstract concepts." Stages of Cognitive development from ages 0-3 years. Age Stage of development Newborn Able to explore, using senses e.g. putting rattle in mouth. Are beginning to develop basic concepts such as hunger, or if they are cold and wet. They are often able to imitate for example, copying adults, who open their mouth wide or stick out their tongue. 1 month Will begin to recognise main carer and respond with movement. They can repeat pleasurable movements such as thumb sucking and wriggling. They can now turn regards to a nearby speakers face. 3 months Are more interested in their surroundings. Begin to understand cause & effect; if you move a rattle, it will make a sound. They are able to laugh & vocalise with increasing tone and intensity. 6 months Expect things to behave in certain ways for example, jack-in-the-box will pop up, but is unlikely to play a tune. They are able to talk to themselves in a tuneful, singsong voiced. 9 months Recognise pictures of familiar things e.g. looking at pictures of their own families. They can watch a toy being hidden and then look for it. They enjoy communicating with sounds e.g. babbling to an adult. 12-15 months Explore objects trial & error methods. They can begin to point and follow when others point. They can begin to treat objects in appropriate ways - cuddle a doll, talk into a telephone. They can seek out hidden objects in the most likely places. 18 months- 2 years Refers to themselves by name e.g. "My name is Tom" they can begin to understand the consequences of their own actions, for example, a wet patch. ...read more.

activities and observation on any child, you should also be making sure that you are using the correct technique e.g. if you are observing to see how a child is when their parent drops them off in the morning, you should have or obtain parental permission from their parents and inform your supervisor. Observations cannot be completed without parents' permission. Observations not only need to be evaluated, but feedback from the observation links to the planning process. Children's interests change so practitioners are able to assess the effectiveness of their planning. E6/C1 In the setting, it is crucial that confidentiality when observing children. Parents are obviously happy for practitioners to carry out observations on their children. Practitioners should also think about where to store them when complete. "Observations and assessment should be stored properly, usually mean in a secure place. It is therefore important, that as a learner, you do not discuss observations with anyone other than those people who are directly responsible for the care of the child. As the bounds of confidentiality can sometimes be difficult to establish, it is therefore always advisable to ask a supervisor first before disclosing any information about a child or young people" (P.Tassoni et al p98 2007). Maintain confidentiality also protects the families, and prevent gossip. You may also be giving documents that are personal and you may hear comments that are not to be repeated outside the workplace, meeting, or conversations. Maintaining confidentiality with observations could also include you to: not mentioning the child's name, for example instead of using the child's name I have used "child A" throughout my observation and you also have to remember not to mention families address or contact details. As a practitioner you have to keep observations in a safe place, for example, you can put in in a filing cabinet with a limited access to the key and not to discuss any information to anyone unless the child is at a risk and you have discussed this with ...read more.

a more difficult time recovering socially than those deprived of maternal contact after six months of age, thus lending support to the existence of a critical period for social development in monkeys. Yet many "natural experiments" looking at orphan children who have been deprived of adequate affection and sensitivity from a primary caregiver have found that, if removed from such a socioemotionally impoverished environment and placed in a loving adoptive home, most children are able to recover socially, emotionally, and cognitively. Thus, while early experiences can and do have an impact on later development, children often demonstrate resilience in response to adverse early experiences. One of the fundamental aspects of human language according to Chomsky, is its creative nature. The last sentence (and, in fact, this one) have probably never been produced before in the history of the world. The same is true for much of what we say every day. So, we do not seem to learn or to speak language by purely imitating other people "This approach is based on the assumption that language acquisition is innately determined and that we are born with a certain system of language that we can call on later. Numerous linguists and methodologists support this innateness hypothesis. Chomsky, who is the leading proponent, claims that each human being possesses a set of innate properties of language which is responsible for the child's mastery of a native language in such a short time (cf. Brown 2002: 24). According to Chomsky, this mechanism, which he calls the 'language acquisition device' (LAD), 'governs all human languages, and determines what possible form human language may take' (Dulay, Burt, Krashen 1982: 6ff) E8 Tassoni P et al (2007) CACHE Level3 Childcare and Education http://archive.ecml.at/documents/relresearch/projectseminarDN.pdf Brown, Henry D. (2002). Principles of Language Learning and Teaching. 4th ed. New York: Longman Dulay, Heidi, Marina Burt and Stephen Krashen (1982). Language Two. New York: OUP ?? ?? ?? ?? Funmilayo Olamide OLAHAN Pin Number : 11/714572 Kingston College Site Number : 348 Page 1 ...read more.

Star rating of 3
This assignment has been written for unit 2 of the level 3 CACHE Child Care and Education course. The evidence provided is for all of the assignment as all criteria have been attempted, however not all criteria have been met. The feedback provided shows how the criteria could be met or extended to show further knowledge and understanding, as well as to link theory to practice. There is evidence of extensive plagiarism in the assignment from both core textbooks and the Internet. In places there is referencing of specific quotes, but in plagiarised areas there is no referencing. A bibliography has been started but it is not in full.