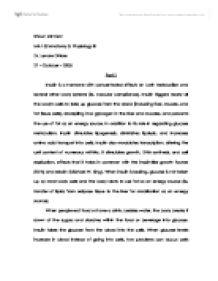 Shaun Johnson MA 150 Anatomy & Physiology III Dr. Lenore DiFiore 27 - October - 2008 Part 1 Insulin is a hormone with concentrated effects on both metabolism and several other body systems (ie, vascular compliance). Insulin triggers nearly all the body's cells to take up glucose from the blood (including liver, muscle, and fat tissue cells), stockpiling it as glycogen in the liver and muscles, and prevents the use of fat as an energy source. In addition to its role in regulating glucose metabolism, insulin stimulates lipogenesis, diminishes lipolysis, and increases amino acid transport into cells. Insulin also modulates transcription, altering the cell content of numerous mRNAs. It stimulates growth, DNA synthesis, and cell replication, effects that it holds in common with the insulin-like growth factors (IGFs) and relaxin (Michael W. King). When insulin is lacking, glucose is not taken up by most body cells and the body starts to use fat as an energy source (ie, transfer of lipids from adipose tissue to the liver for mobilization as an energy source). When people eat food or have a drink, besides water, the body breaks it down of the sugars and starches within the food or beverage into glucose. ...read more.

Holt) One startling statistic that I found interesting is that 5.7 million people, or nearly one quarter, within the United States are oblivious to the fact that they have diabetes (American Diabetes Association). Another statistic that shows that diabetes is starting to grow faster than AIDS is "There are 23.6 million people in the United States, or 8% of the population, who have diabetes. The total prevalence of diabetes increased 13.5% from 2005-2007. Only 24% of diabetes is undiagnosed, down from 30% in 2005 and from 50% ten years ago" (American Diabetes Association). With a stat like this, it shows me that diabetes is on the raise in a staggering rate, but that physicians are noticing the warning sign earlier, and having their patients tested. However, this stat also shows that physicians are not informing their patients how to prevent diabetes in the first place (eating right, exercise, and ECT.). Resistin is a small protein secreted by the immune cells monocytes and macrophages (Rossetti). Studies of resistin have shown that resistin delivery to the hypothalamus in mice stimulated changes in the circulating levels of hormones that help regulate glucose production, in a manner independent of glucose production itself (Rossetti). ...read more.

Taking herbal supplements like; alpha-lipoic acid (ALA), chromium, omega-3 fatty acids, and polyphenols (National Center for Complementary and Alternative Medicine), would help Morgan with her type 2 diabetes. However, the herbal supplement ephedra should be one that she stays far from. Ephedra was widely popular in the early 2000's as a diet aid and energy booster. However, the side effects outweighed the benefits. Some of the major risk factors are: hypertension, tachycardia, CNS excitation, arrhythmia, myocardial infarction, stroke, and death (Mayo Clinic). One sports related case that brought risk factors into the spotlight has the death of Steve Bechler, a prospective pitcher for the Baltimore Orioles (Attkisson). Ephedra affects diabetes patients in a specific manner. It can raise blood sugars dramatically and make control extremely difficult (The Diabetes Mall). With a side affect like this, Morgan and any diabetes patient should stay away from this possible killer5. Morgan does have a long hard road in front of her. First, she needs to understand that this is not a death sentence for her. She will have to work very hard to keep her diabetes under control. With a proper diet, excise, and the right herbal supplements, she will be able to live a full life. ...read more.