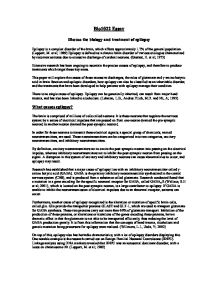 Discuss the biology and treatment of epilepsy.

Bio1022 Essay Discuss the biology and treatment of epilepsy Epilepsy is a complex disorder of the brain, which affects approximately 1.7% of the general population. (Leppert, M. et al; 1989) Epilepsy is defined as a chronic brain disorder of various etiologies characterized by recurrent seizures due to excessive discharge of cerebral neurons. (Gastaut, H. et al; 1973) Extensive research has been ongoing to ascertain the precise causes of epilepsy, and therefore to produce treatments which target these key areas. This paper will explore the causes of these excessive discharges, the roles of glutamate and ?-amino butyric acid in brain function and epileptic disorders, how epilepsy can also be classified as an inheritable disorder, and the treatments that have been developed to help patients with epilepsy manage their condition. There is no single cause of epilepsy. Epilepsy can be genetically inherited, can result from major head trauma, and has also been linked to alcoholism. (Lehman, L.B., Andres Pilich, M.D. and Nii, A; 1993) What causes epilepsy? The brain is comprised of millions of cells called neurons. It is these neurons that regulate the nervous system by a series of electrical impulses that are passed on from one neuron (named the pre-synaptic neuron) to another neuron (named the post-synaptic neuron). ...read more.

(Leppert, M. et al; 1989) Subsequent research has revealed that many epileptic disorders show a heritable trait, for example childhood absence epilepsy (chromosome 8), febrile seizures (chromosomes 2,8 and 19) and juvenile absence epilepsy (chromosome 21). (Willmore, L.J, Ueda, Y; 2002) Many of the hereditary epileptic conditions appear to be autosomal dominant, however this is not always the case. (Willmore, L.J., and Ueda, Y; 2002) Contrary to this, epilepsy may also be triggered by other disorders, which affect the function of the brain, for example cerebral palsy (Singhi P, Jagirdar S, Khandelwal N, Malhi P; 2003) or brain tumors (Khan RB, Marshman KC, Mulhern RK; 2003) It may also be caused by complications in prenatal brain development, when the brain is very susceptible to damage. (Thompson RA, Nelson CA; 2001) This can be caused if the mother uses excessive methods of alcohol and drug use, or is under-nourished. As the brain develops, if complications arise, the neurons of the brain may not form properly, thus producing abnormalities in the neurotransmission of electrical signals in the brain, which can produce seizures. A number of environmental factors may also attribute to epilepsy, for example carbon monoxide poisoning. Research has positively correlated carbon monoxide poisoning to epileptic seizures. This is due to the fact that carbon monoxide binds to hemoglobin, the molecule that transports oxygen throughout the body, with a great affinity. ...read more.

Some side effects include nausea and diarrhea, and in the some cases addiction may occur. (Ashton H, Young AH; 2003) The search for better and safer anti-epileptic drugs is an ongoing concern. Another treatment, which is relatively new, is vagus nerve stimulation, or VNS. This works by stimulating the vagus nerve, which is responsible for muscle co-ordination involving swallowing and speaking, and also sending information about the heart, lungs and stomach to the brain. A small device is implanted into the chest, and this sends electrical signals to the brain, via the vagus nerve, to prevent seizures by stimulating the production of GABA and another inhibitory chemical, glycine. Research into the effects of VNS by Sirichai et. al revealed that in 15 out of the 24 people VNS was trialled on, there was a greater than 50% decrease in the frequency of seizures experienced. In the future VNS may provide a sound alternative to anti-epileptic drugs. (Sirichai C. et. al; 2001) Conclusion Epilepsy takes on many shapes and forms, and the research into what causes it and the best method to treat it is ongoing. Having identified the GABAAR and GABA production as a primary source of epileptic seizures is a huge step forward however, and a wide range of treatments have been prepared using this information. It will be many years yet before a 100% safe treatment is found for epilepsy. ...read more.