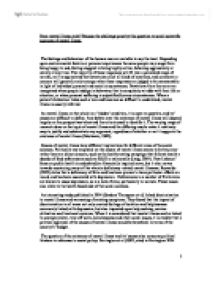 Does mental illness exist? Discuss the challenge pose by this question to social scientific accounts of mental illness. The feelings and behaviour of the human race are variable to say the least. Depending upon environmental factors or personal experiences the same people may range from being happy to sad, feeling sluggish to being highly active, behaving aggressively or calmly at any time. The majority of these responses will fit into a perceived range of normal, as it is appreciated that events can elicit all kinds of emotions, and comment or concern will generally only emerge when these responses are judged to be unreasonable in light of individual personal and social circumstances. Deviations from the norm are recognized when people indulge in behaviour that is completely at odds with their life or situation, or when personal suffering is unjustified by any circumstances. When a person's behaviour takes such a turn and becomes so difficult to understand, mental illness is usually inferred. As mental illness on the whole is a 'hidden' condition, it is open to question, and its' causes are difficult to define. ...read more.

The question of the existence of mental illness and its' causes also concerns political thinkers in reference to social policy. Farrington et al (1982, cited in Farrington 2004 p.156) found that delinquents received more inconsistent parental care than people not deemed 'menaces to society', going as far as to say that poor parental supervision could predict delinquency in boys. A parent with mental illness is much less able to provide adequate care for their children, thereby increasing the risk of delinquency which in turn impacts upon education figures and crime rates - direct influences on the public purse. The same study shows the impact that the causes of mental illness can have in the eyes of criminologists. The effect of mental health problems in parents on rates of offending would encourage criminologists to look into the origins of such ailments. Gray et al (2004) echoed the widely held belief that offending in mentally disordered patients is directly related to the symptoms of their illness in their study on evaluation of the risks of re-offending. ...read more.

Could it be that mentally ill offenders are less sophisticated and therefore more likely to be apprehended, and do the police pursue charges against mentally ill offenders more vigorously in the hope of ensuring that treatment becomes available? In certain cases it may be possible that the act of committing a crime has caused great guilt and mental suffering. If it were found that the prison experience increased the incidence of mental disturbance therefore making mental illness an effect of crime rather than a cause, it would fall back to the interests of the politicians and penologists to implement new legislation and procedures to prevent this. There are hundreds of studies relating to the existence of and causes of mental health, which vary tremendously in opinions and results. It would be nearly impossible to attribute any one opinion to any single part of the social sciences, and any conjecture could be easily argued against with an opposing set of results and speculation. What can be said is that clearly the question of mental health, its' causes and indeed its' very existence is pertinent to society on many levels, and is therefore of interest to all social scientists. ...read more.