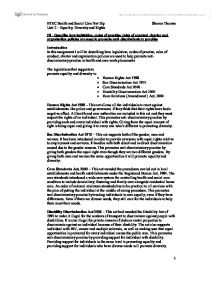 P4 - Describe how legislation, codes of practise, rules of conduct, charter and organisation policies are used to promote anti-discriminatory practise Introduction In this assignment I will be describing how legislation, codes of practise, rules of conduct, charter and organisation policies are used to help promote anti-discriminatory practise in health and care work placements The legislations that supports to promote equality and diversity is: * Human Rights Act 1998 * s*x Discrimination Act 1975 * Care Standards Act 2000 - * Disability Discrimination Act 2005 * Race Relations (Amendment ) Act, 2000 Human Rights Act 1998 - This act allows all the individuals to react against establishments like police and government, if they think that their rights have had a negative affect. All health and care authorities are included in this act and they must respect the rights of an individual. This promotes anti-discriminatory practise by providing each and every individual with rights. Giving them the equal amount of right is being equal and giving it to every one who's different is promoting diversity. s*x Discrimination Act 1975 - This act supports both of the gender, men and women. It has been introduced in order to provide everyone with equal rights relative to employment and services. It handles with both direct and in-direct discrimination caused due to the gender reasons. This promotes anti-discriminatory practise by giving both genders the equal right even though they are two different genders. By giving both men and women the same opportunities it will promote equality and diversity. Care Standards Act, 2000 - This act mended the procedures carried out in local establishments and health establishments under the Registered Homes Act, 1984. The care standards introduced a wide new system for controlling health and social care condition to include domiciliary, fostering and family care alongside residential home care. An order of national minimum standards has to be practical to all services with the plan of putting the individual at the middle of caring procedure. ...read more.

This act is of the parliament of United Kingdom which covers the following areas - the creation of the Equality and the Human Rights which outlaws the discrimination against goods and services on the grounds of religion and belief. It also allows the government to introduce regulations to outlaw discrimination on the grounds of s****l orientations. The main aspect of this: The Equality Act 2006 is as follows: * Peoples to ability to achieve their potential is not limited by prejudice or discrimination * There is respect and protection for each individual's human rights * There is respect for dignity and worth of every individual The national policy that I have chosen in the anti-discriminatory programmers every child matters The government makes sure that no matter the backgrounds each child has, they must receive all the support they can To have this support they need to: * be healthy * stay safe * enjoy and achieve * make a positive contribution * achieve economic well-being The government meets these needs by offering all kinds of service for children from hospitals, school, voluntary groups etc. by working together to try and put a stop to child harm and help them live a life that they deserve. There are children's trusts to find out what is best for the children. The children and the young will also need to involve in the process to help them. The inspectors will give a chance for the children to say their views and opinions. By being healthy the national policy insists on providing school dinners in school, so that the child can be observed by the school that they are getting healthy. They make sure their whole diet is healthy in order to stay healthy through out. They also insist on 5-a-day to have balanced diet. The involvement of Jamie Oliver in school dinners influence the children that they should try and have a healthy living. ...read more.

If that also doesn't succeed then you could go to the board of education or even the social services to explain to them if you are still dissatisfied. One of these methods should help to take action on your dissatisfaction. In the case of Baby P (http://en.wikipedia.org/wiki/Death_of_Baby_P), the doctors were seen 60 times. The health care professional had 60 chances on figuring out how Baby P had bruises on his body. There were many health care professional groups working in this case. As they did not record any of the incidents, the communications between these groups were not considered. If it was considered, all the groups would have been aware of what has occurred and what needs to be done to prevent it. The parents should have been questioned about what has happened. Their house should have been more observed to find any things against the guardians. The mother had covered the bruises with chocolate cream when going to the doctors, to prevent them from seeing the marks. The nurses should have taken Baby P into a separate room to clear the child up; if this was done the bruises would have been visible and would have had more reason for further investigation. The social workers were also aware of this problem. They may have questioned the parents and they kept denying it. To the social workers point, bruises occurred on the child body and the parents were not aware of how this happened. They should have separated the child from its parents to see if the bruises had occurred again. The Every Child Matters makes sure that children with difficult life must be provided with service or be put in to care for them to have a best life they deserve. Conclusion Overall I feel that the legislation and the policies promote anti-discrimination which is more evident in Every Child Matters, Jamie Oliver's school dinners. It should have also been applied in the case of Baby P. With applying it to the Baby P's case, it would have promoted the baby's individual needs. ...read more.