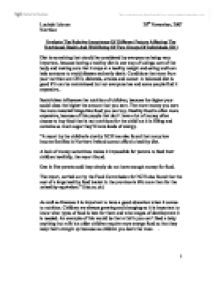 Diet is something that should be considered by everyone as being very important, because having a healthy diet is one way of takings care of the body and making sure that it stays at a healthy weight and eating well can help someone to avoid disease and early death. Conditions that stem from poor nutrition are CHD, diabeteis, strokes and cancer. A balanced diet is good if it can be maintainead but not everyone has and some people find it expensive..

Social class influences the nutrition of children, because the higher your social class the higher the amount that you earn. The more money you earn the more material things like food you can buy. Healthy food is often more expensive, because of this people that don’t have a lot of money often choose to buy food that is not nutritious for the child but it is filling and contains so much sugar they’ll have loads of energy.

“A report by the children's charity NCH has also found that many low income families in Northern Ireland cannot afford a healthy diet.

A lack of money sometimes makes it impossible for parents to feed their children healthily, the report found.

One in five parents said they simply do not have enough money for food.

The report, carried out by the Food Commission for NCH also found that the cost of a large healthy food basket in the province is 6% more than for the unhealthy equivalent.” (bbc.co.uk)

As well as finances it is important to have a good education when it comes to nutrition. Children are always growing and changing so it is important to know what types of food is best for them and what stages of development it is needed. An example of this would be that at birth you can’t feed a baby anything but milk but older children require more energy food so that they keep their strength up because as children you learn the most.        .

If someone likes the look of something it is common of them to want it and if they can have it to take it. A child is much more likely to eat something if they like the look of it and if it looks appealing so it is important that if trying to expand the taste buds of someone to make things look interesting because people do not like change.

“Every individual has unique likes and dislikes concerning foods. These preferences develop over time, and are influenced by personal experiences such as encouragement to eat, exposure to a food, family customs and rituals, advertising, and personal values. For example, one person may not like frankfurters, despite the fact that they are a family favorite.” (faqs.org)

Personal preference is an individuals opinion and they have a right to express it but in proportion otherwise it could be seen as selfish.

Some children in the world may have a poor nutritional diet, but some children hardly eat at all. This is more common in developing countries where they live in poverty.

“The famine affecting 14 million people across southern Africa is likely to last at least another year, the United Nations food agency has warned.

This should be a time of rainfall across most of the region but in country after country the rains have been patchy and interspersed with dry spells.” (bbc.co.uk)

It is often dismissed by the western world because we don’t have to live in some of the ways in which people in countries in Africa do. Children are the ones most at risk from food poverty because their bodies are still growing so they need a healthy nutritious diet in order to maintain a healthy body.

At school friends and relationships with others mean everything because you are at school for a long time and it can be quite uncomfortable being at school with no friends. Whilst at school children can feel pressure to conform it is known as peer pressure.

“Peers influence your life, even if you don't realize it, just by spending time with you. You learn from them, and they learn from you. It's only human nature to listen to and learn from other people in your age group.” (bbc.co.uk)

There are two type of peer pressure positive and negative and it is negative peer pressure that often pressures people to conform to those around them.

Being pregnant can mean to some people “eating for two”. During the nine months and the time after if you breastfeed pregnant people have increased nutritional needs. This is because as well as the new mother having to keep herself healthy she has to have enough nutrients for her unborn baby to survive off and she will still have to produce milk for months afterwards.

“Many women have the perception of pregnancy as the sole time during their lives when they don't have to diet and can eat whatever they want. It's true that pregnant women need a moderate amount of added calories, but if "eating anything" means eating a high percentage of junk food and sugar-laden desserts, then maybe it's time to reassess your overall eating habits.” (health.discovery.com)

Pregnancy is a time where eating habits change but not all change is a positive change and people that are pregnant should sustain eating a healthy balanced diet so that the mothers body doesn’t feel any negative effects associated with poor diet.

Although it is a common belief that expecting mothers can have food for two, in reality it is only about 200 calories more during the last three months of pregnancy and about 500 calories whilst breast feeding The mother has to do this to give her the extra strength and energy that she needs to carry the baby and the weight of the breast milk.

As well as eating more calories pregnant people are recommended to take extra vitamin supplements and eat a diet that has lots of folic acid this is to give the baby the best chance of being healthy and not having problems later in life. During pregnancy women sometimes put on a lot of weight this is sometimes due to lack of knowledge about correct foods to eat.