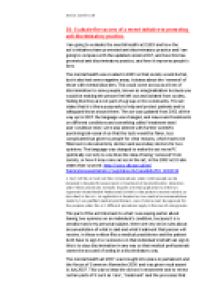 Evaluate the success of a recent initiative in promoting anti discriminatory practice.

﻿Jessica Licorish 12B D1- Evaluate the success of a recent initiative in promoting anti discriminatory practice. I am going to evaluate the mental health act 1983 and how the act?s initiatives have promoted anti discriminatory practice and I am going to compare with the updated version 2007, and how this has promoted anti discriminatory practice, and how it improves people?s lives. The mental health was created in 1983 so that society would be fair, but it also had some negative areas, it states about the ?removal? of those with mental disorders. This could come across as a form of discrimination to some people, known as marginalisation because you would be making the person feel left out and isolated from society, feeling like they are not part of a group or the community. The act states that it is there purposely to help and protect patients and to safeguard those around them. The act was updated from 2001 all the way up to 2007 the language was changed, and issues and treatments on different conditions and something called ?treatment tests? and ?condition tests? were also altered with further scientific psychological research so that the tests would be fairer, less complicated but given to people for clear reasons, which had to be filled out in documents by doctors and secondary doctors for two opinions. The language was changed to make the act more PC (politically correct) ...read more.

PART 2 Amendment of primary legislation 3. Amendment of the Local Authority Social Services Act 1970 4. Amendment of the Disability Discrimination Act 1995 6. Amendment of the Disability Discrimination Act 2005 PART 3 Amendment of subordinate legislation 7. Amendment of the Mental Health Act Commission (Establishment and Constitution) Order 1983 15. Revocation of the Mental Health Act 1983 (Remedial) Order 2001 20. Amendment of the Mental Health (Care and Treatment) (Scotland) Act 2003 (Consequential Provisions) Order 2005 I am now going to explain why there are new amendments to the act my information comes from: http://www.legislation.gov.uk/ukdsi/2008/9780110819600 The majority of the act is about extending it, with extra details on treatment and mental procedures and putting the act into action in other parts of the UK, these places include Northern Ireland, Scotland and Wales, and I have placed an example in place. Article 2 provides that generally this Order extends to England and Wales only. Article 4 also extends to Scotland and Northern Ireland. Article 17 extends to Scotland only. Article 20 also extends to Northern Ireland. This section of the new act is all about amendments and changes in other parts of the UK due to their laws and regulations. I have looked at Article four of the 2007 act underneath you will find it and then I am going to explain how this stops or prevents anti discriminatory practice: Article 4 repeals the term ?mental impairment? from the Disability Discrimination Act 1995, as this term is no longer used in the 1983 Act. ...read more.

They have also created new roles in mental health areas and this allows nurses, psychologists and other health occupational workers to become something called approved mental health professional (AMHP) these people are trained in a number of different ways especially to promote anti discriminatory practice. For children with mental health illness they go through a different process to adults and come under a different section in the mental health act. However due to financial issues with hospitals and making changes and amendments this part of the act was postponed and later on put into action April 2010. The amendments made to the act were originally going to renew the entire 1983 act but was opposed against by members of parliament, the new amendments rid of the treatability test to allow clinicians to assess individuals properly and efficiently before providing the correct care and treatment. Although the act has been successful in some ways there have been certain issues and controversial issues on why the entire act wasn?t renewed or why it needed to be renewed. Not only that but since the act came into action in 1983 the government have failed to reach their targets on treatment, equality in society and diversity and failed to reach targets for reducing the amount of individuals suffering with mental disorders. ...read more.