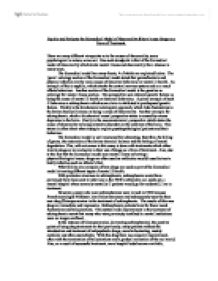 Explain and Evaluate the Biomedical Model of Abnormality &amp; how it uses Drugs as a Form of Treatment

Explain and Evaluate the Biomedical Model of Abnormality & how it uses Drugs as a Form of Treatment. There are many different viewpoints as to the causes of abnormality, some psychological in nature, some not. One such standpoint is that of the biomedical model of abnormality which treats mental illness and abnormality like a disease in many ways. The biomedical model has many facets, 4 of which are explained below. The `germ` aetiology section of the biomedical model stated that germs/bacteria and physical infection are the main causes of abnormal behaviour or mental ill health. An example of this is syphilis, which attacks the central nervous system and as a result affects behaviour. Another section of the biomedical model is the genetics as aetiology for mental illness section. This perspective sees inherent genetic factors as being the cause of mental ill health or abnormal behaviour. A prime example of such ill behaviour s schizophrenia which some claim is attributed to predisposed genetic factors. Thirdly is the biochemical aetiological approach, which links fluctuations in the brains chemical balance as being a cause of abnormality. Another example for schizophrenia, which a biochemical causal perspective states is caused by excess dopamine in the brain. ...read more.

This would imply that drugs would never be a permanent treatment. Relating to the biomedical models treatment using drugs, (for mental illness), depression is often combated using antidepressants. An antidepressant called Prozac, (Fluoscetine), is used and widely prescribed for less severe depression; combating depression by inhibiting the uptake of serotonine in the brain, alleviating depression temporarily as a result. Tricyclic antidepressants are used for more severe depressions and block the uptake of norrepinephrine, (NE), as a result of this NE being available the patient becomes less depressed. An average of 63 and 75 percent of previously depressed patients showed significant clinical improvement (Beck 1973). Monoamine Oxidase, (MAO), inhibitors inhibit the enzyme MAO and prevent the breakdown of NE, making more NE available and causing the patient to become less depressed as a result of quantities of NE, (a neurotransmitter), becoming available. However, anti depressants have many side effects as well as good points. For one they do actually alleviate depression but this effect is only a short term one, the depression, (or whatever is causing it), will still reoccur for the most part when the medication ceases. Also, particularly with relevance to MAO inhibitors, the side effects may be toxic and/or lethal. ...read more.

Also, from a speculative sociological and economic stance, the addictiveness and the continuing need for drug treatment could possibly invoke pharmaceutical companies to either extortionately raise prices due to the need for the product or , if a better drug is found which cures the condition rather than only treating the symptoms of the condition, then the pharmaceutical companies may either delay the new drugs release or not release it at all due to the fact that they would have a steady income from the sales of the present drug which was available. The above is purely speculative and hypothetical but nevertheless raises ethical questions. Also, on an ethical note, it should be noted that if a doctor is aware of a drug having severe side effects but the patient pays for the drug, (or is in desperate need of the drug as part of their treatment), the ethical decision is very often not an easy one. In summary, the use of drugs via the ideas and views expressed by the biomedical model is not easy to categorise/judge as either totally wrong or totally correct. It should be the case that a patient is not given the treatment without some prior knowledge, (on the part of the doctor and the patient), as to the negative elements such as the temporary status of the treatment and the possible side effects. ...read more.