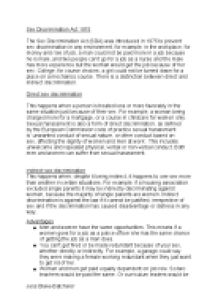 Explain and Outline the key features of the Sex Discrimination Act.

﻿Sex Discrimination Act 1975 The Sex Discrimination Act (SDA) was introduced in 1975 to prevent sex discrimination in any environment, for example; in the workplace, for money and role of job, a man could not be paid more in a job because he is male, and two people can?t go for a job as a nurse and the male has more experience but the woman would get the job because of her sex. College, for course choices, a girl could not be turned down for a place on a mechanics course. There is a distinction between direct and indirect discrimination. Direct sex discrimination This happens when a person is treated less or more favorably in the same situation just because of their sex. ...read more.

Indirect sex discrimination This happens when, despite it being indirect, it happens to one sex more than another in certain situations. For example; if a housing association excluded single parents it may be indirectly discriminating against women, because the majority of single parents are women. Indirect discrimination is against the law if it cannot be justified, irrespective of sex and if the discrimination has caused disadvantage or distress in any way. Advantages 1. Men and women have the same opportunities. This means if a women goes for a job as a police officer she has the same chance of getting the job as a man does. 2. You can?t get fired or be made redundant because of your sex, whether directly or indirectly. ...read more.

2. Sometimes males still get prioritised because females have the ability to get pregnant and have a maternity leave. For example, if two 28 year old male and female individuals went for a job the man would be more likely to get the job because the women is at a stage where she may be thinking about children and workplaces would rather take on someone they pay to do the job then pay to have a maternity leave, even if the woman has no thought of children. 3. It can be very hard to prove discrimination as everybody?s idea and views on it are different. There is a very wide range of discrimination and lots of ideas about it. Also sometimes it is unintentional and people do not realise they are doing it, but someone else might. Jess Blake-Batchelor ...read more.