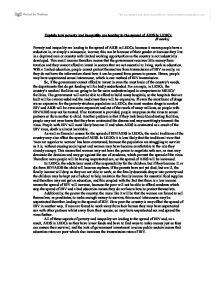 Another problem is that if they lack basic blood testing facilities, people may not even know that they have contracted the disease and may unwittingly transmit the virus. People with HIV will most likely become ill and when AIDS is contracted as a result of the HIV virus, death is almost inevitable. As well as financial causes for the spread of HIV/AIDS in LEDCs, the social traditions of the country may also affect the spread of AIDS. In LEDCs it is less likely that the traditional view that 'men are superior to women' has been overturned, because the population are struggling to survive as it is, without causing social upset and women may have become comfortable to the role they already occupy. This means that women may not have the power to negotiate safe sex, as men may dominate the decision and may go against the use of condoms, which prevent the spread of the virus. ...read more.

Additionally, the poorer the country, the more like it will be that the women are forced to sell themselves, as prostitutes, to make enough money to survive; this sexual intercourse may be unprotected therefore leading to the spread of HIV. How poor the country is may effect the spread of HIV in another way, if men are forced to work away from their homes they may have unprotected sex with other partners whilst away from their spouse, so may have unprotected sex and spread the virus further. All of these aspects of poverty and inequality are leading to the spread of HIV and, as a result, AIDS in LEDCs as they have lower funds and have to find ways to make money just so they can ensure their survival, and the lack of government investment in some public sectors means that education rates are poor which also increases the transmission rates of HIV. Neil Adams 12R2 ...read more.