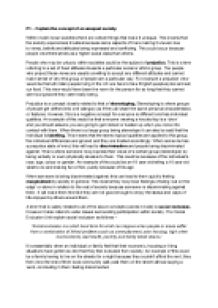 Explain the concept of an unequal society and its effects on health.

﻿P1 ? Explain the concept of an unequal society. Within most known societies there are certain things that make it unequal. This means that the society experiences troubles because some aspects of it are making it uneven due to views, beliefs and attitudes being expressed and conflicting. This could occur because people view themselves as a higher social class than others. People who may be unlucky within societies could be the subject of prejudice. This is a term referring to a set of fixed attitudes towards a particular social or ethnic group. The people who project these views are usually unwilling to accept any different attitudes and cannot make sense of why this group of people are a particular way. For example a prejudice view would be that all Indian people living in the UK are here to take English peoples jobs and eat our food. This view would have been the norm for the person for so long that they cannot see how ignorant they were really being. ...read more.

is social exclusion. However it also caters to wider issues surrounding participation within society. The Social Exclusion Unit explain social exclusion as follows ? ?Social exclusion is a short hand term for what can happen when people or areas suffer from a combination of linked problems such as unemployment, poor housing, high crime environments, bad health, poverty and family break downs.? It is essentially when an individual or family feel that their economic, housing or living situations have gotten so dire that they feel excluded from society. An example of this could be a family having to live on the streets for a night because they couldn?t afford the rent, they then view the rest of their local community walk past them on the street without saying a word, concluding in them feeling disconnected. P2 ? describe the social inequalities that exist within society Within today?s modern, industrialised society, there is overwhelming evidence that standards of health, the incidence of ill health or morbidity, and life expectancy, all vary by social groups and especially by social class. ...read more.

When you are living with a disability, this will make it harder to stay in good health for it may be difficult to remain active, especially with physical conditions. This means that within the UK people who have disabilities will experience worse health than those without. The severity of their ill health will depend on the severity of the disability. Their living conditions can however often be good, especially if the person is wealthy. This will promote good health and well being and help the individual. In 2003, a mental health charity called MIND published a report about gay, lesbian and bisexual people. The results showed that these people were in a higher level of psychological stress than heterosexual people. This could have been because of bullying from a young age or difficulty with self acceptance. More recent studies have shown that the UK lacks necessary knowledge about gay or lesbian mental health needs. In terms of age, the majority of people will (obviously) be more prone to ill health as they approach old age, due to disability and diseases. Considering all of the above, if a person is poor then this will make their level of health and well being a lot worse. ...read more.