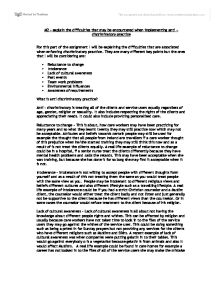 M2 - explain the difficulties that may be encountered when implementing anti - discriminatory practice For this part of the assignment I will be explaining the difficulties that are associated when enforcing discriminatory practice. They are many different key points but the ones that I will be considering are: � Reluctance to change � Intolerance � Lack of cultural awareness � Past events � Team work problems � Environmental influences � Awareness of requirements What is anti discriminatory practice? Anti - discriminatory is treating all of the clients and service users equally regardless of age, gender, religion or sexuality. It also includes respecting the rights of the clients and appreciating their needs. It could also include providing personalised care. Reluctance to change - This is about, how care workers may have been practicing for many years and so what they learnt twenty they may still practice now which may not be acceptable. Attitudes and beliefs towards certain people may still be used for example the thought that all people from Ireland are travellers if a care worker thought of this prejudice when he/she started training they may still think this now and as a result of is not treat the clients equally. ...read more.

Or in some cases the counselor would refuse treatment to the client because of his religion. Lack of cultural awareness - Lack of cultural awareness is all about not having the knowledge about different people rights and wishes. This can be affected by religion and usually because care workers have not taken time to look in to the files of the service users they may go against the wishes of the service user. This could be doing something such as being a priest in for Sunday prayers but not providing any services for the clients who have different religions such as Muslims and Sikhs. A recent example of lack of cultural awareness was when companies were putting gelatin in to their tables. This would go against everybody o is a vegetarian because gelatin is from animals and also It would affect Muslims. A real life example could be found in care homes for example a career has not looked in to the files of all of the service users she may make the mistake of putting meat on a vegetarians plate or making a Muslim client eat pork ...read more.

would be to high risk for the service users to be taken out, and also because o the amount of housing in the area there may not even be a garden for the service users to use. Also the background of a person can affect the quail of care, if a person is from a deprived background the employees may treat them badly as a pose to people from wealthy backgrounds that would be treated much different Awareness of requirements - the final problem that could be faced hen implementing anti - discriminatory practice is the awareness of what is acceptable and what isn't for example if a law has been updated it is unlikely that care staff will know about this and so would be at risk f breaking the law through unacceptable practice. Also some staff may not be familiar with any of the relevant health and social care legislation. For example a meme of staff may treat clients different on the ground of race, sex or gender without knowing that there are laws to protect people from this type of discrimination. ?? ?? ?? ?? ...read more.