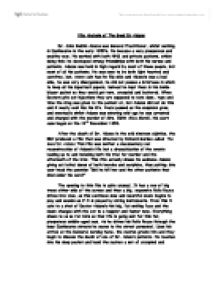 Film Analysis of The Good Dr Adams Dr. John Bodkin Adams was General Practitioner, whilst working in Eastbourne in the early 1950's. He became a very prosperous and wealthy man. He worked with both NHS and private patients, whilst doing this; he developed strong friendships with both his nurses and patients. Adams was held in high regard by most of these people, but most of all his patients. He was seen to be both light hearted and carefree, but, every coin has its flip side and Adams's was a bad side, he was very disorganised, he did not posses a briefcase in which to keep all his important papers, instead he kept them in his inside blazer pocket so they would get torn, crumpled and battered. ...read more.

The opening to this film is quite unusual. It has a row of big trees either side of the screen and then a big, expensive Rolls Royce drives into view, as this continues slow and mournful music begins to play and sounds as if it is played by string instruments. From this it cuts to a shot of Doctor Adams's his big, fat smiling face and the music changes with the cut to a happier and faster tune. Everything shown to us so far tells us that life is going well for this fat, prosperous middle-aged man. As he drives his Rolls Royce through the busy Eastbourne streets he waves to the street personnel. Upon his arrival at the Balmoral nursing home, the matron greets him and they begin to discuss the death of one of Dr. Adam's patients. ...read more.

The second part of the film is the main part of it, and it gives quite a detailed account of the trial. The third and final part of the dramatization of Adam's life is mainly the aftermath of the trial, but it finishes with another funeral procession, although it is not another of Adams's patients it is Adams himself who died in the mid nineteen eighties. The court case that we see during he film is set in the Old Bailey, in London, but was actually filmed in Liverpool's major court house. As the case begins we are shown Adams in his cell, but because he is on remand he is in his own clothes and able to read newspapers and books. The meets with his lawyer MR Geoffrey Lawrence and discusses the forthcoming trial. ...read more.