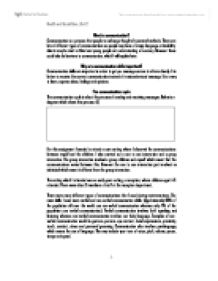 For this assignment I needed to attend a care setting where I observed the communications between myself and the children. I also carried out a one to one interaction and a group interaction.

At first the girl had a closed posture as her arms and legs seemed to be crossed but gradually throughout the activity I think she felt more confident. During the activity she had an open posture, this was shown as her arms were loose and she seemed relaxed and comfortable. I made sure I gave the girl personal space which is also known as proximity, this was so that she didn't feel anxious. My second interaction ~ group interaction My second interaction was a group interaction, which involved me doing an activity with a group of children. In groups of three's or four's the children had to perform a bit of drama, which again was linked to the world book day' however this time the theme was Halloween. As a group we decided to act on a book called "Room on the Broom", the reason why we did this as a group was in order to show that there opinions are respected. In this interaction I made sure there was a good communication skill as it made the interaction more successful. Along with the children I sat on the floor while deciding what story to act upon, this was so that I was at the same level as them and wasn't making them feel uncomfortable. ...read more.

I did not hesitate to reply back as I felt comfortable with them. But I think that I could have used body language and a bit more eye contact in order to interact with them with much more confidence. I realise that interacting with children that you don't know is much harder than if you do know them because they get to know you, however good communications come with experience and next time I feel I will be much better at it. I didn't really have any problems communicating with children in the reception as I had already worked with children before around the same age group. However in order to communicate well I used facial expressions, gestures and other body language. I was always facing the students, especially ones with hearing impairments as it made it much easier to communicate with them as they could see my face. However I could have interacted more with them and in order to improve my communication skills I could have come a little more down to their level when taking to them and carrying out the activity. Bibliography Throughout this assignment I have put in brackets. For example (1), next to key terms/skills or definitions. ...read more.