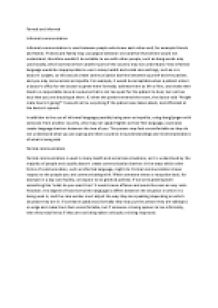 Formal and Informal Communication in Health and Social Care

﻿Formal and informal Informal communication Informal communication is used between people who know each other well, for example friends and family. Friends and family may use jargon between one another that others would not understand, therefore wouldn't be suitable to use with other people, such as slang words only used locally, which someone from another part of the country may not understand. Very informal language would be inappropriate to use in many health and social care settings, such as in a doctor's surgery, as this would create communication barriers between yourself and the patient, and you may come across as impolite. ...read more.

If, when the patient entered the room, the doctor said "Alright mate how's it going?" It would not be surprising if the patient was taken aback, and offended at the doctor's speech. In addition to the use of informal language possibly being seen as impolite, using slang/jargon with someone from another country, who may not speak English as their first language, could also create language barriers between the two of you. The person may feel uncomfortable as they do not understand what you are saying and there could be misunderstandings and misinterpretations of what is being said. ...read more.

If we were greeting with something like "what do you want then" it would cause offense and would be seen as very rude. However, the degree of how formal the language is differs between the situation in which it is being used in, and the care worker must adjust the way they are speaking depending on which situation they are in. If someone speaks too formally they may put the person they are talking to on edge and make them feel uncomfortable, but if someone is being spoken to too informally, then they may feel as if they are not being taken seriously or being respected. ...read more.