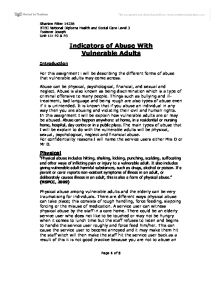 Indicators of Abuse With Vulnerable Adults Introduction For this assignment i will be describing the different forms of abuse that vulnerable adults may come across. Abuse can be physical, psychological, financial, and s****l and neglect. Abuse is also known as being discrimination which is a type of criminal offensive to many people. Things such as bullying and ill-treatment, bad language and being rough are also types of abuse even if it is unintended. It is known that if you abuse an individual in any way then you are abusing and violating their civil and human rights. In this assignment I will be explain how vulnerable adults are or may be abused. Abuse can happen anywhere: at home, in a residential or nursing home, hospital, day centre or in a public place. The main types of abuse that I will be explain to do with the vulnerable adults will be physical, s****l, psychological, neglect and financial abuse. For confidentiality reasons I will name the service users either Mrs D or Mr D. Physical "Physical abuse includes hitting, shaking, kicking, punching, scalding, suffocating and other ways of inflicting pain or injury to a vulnerable adult. It also includes giving vulnerable adult harmful substances, such as drugs, alcohol or poison. ...read more.

In a newspaper that I read called the 'Daily Mail,' there were quotes given by children of the service users in different care homes that have explained issues that have happened to their parents. "Hunter Watson, a 71 year old petitioned the Scottish parliament for adequate safeguards to prevent vulnerable adults being given 'chemical coshes' inappropriately. Mr Watson was alarmed to discover that the care home staffs were giving medication to his 90 year old mother disguised in her meals. His mother told him she was being drugged up and staff confirmed they were putting sedative in her food." (Daily Mail, Saturday, October 6, 2007) This was said by the son of the lady who had been given the medication in her food illegally. Mr Gary Fitzgerald is the chief executive of the campaign group on elder abuse. He stated that illegal action was being held in some care homes one of the issues that he was saying happens is "The medication should be dispose in such instances, but that doesn't always happen. What often happens is that a sedative which has been prescribed for one person is then used on somebody else who has not been prescribed it, in order to keep them quiet." ...read more.

This type of abuse comes about in countless care homes within the UK. In many cases I have experienced financial abuse; when I was in a care home I saw that a care worker took a service users money and told him that she would hold the money for him and give it back to him after he had finished eating however when it came to the tome that she had to return the money back to the service user she had told him that she already gave it to him before he went in his room and made it look as though he was forgetting things. In the Daily Mail I have witnessed an article about financial abuse. "Her wedding ring has gone. My mother said to me: "The woman took my ring away" - meaning one of the staff - but the staff just say it must have fallen off her finger and accidently been vacuumed up." (Daily Mail, Saturday, October 6, 2007) ?? ?? ?? ?? Shanice Pitter 14236 BTEC National Diploma Health and Social Care Level 3 Fosterer Joseph Unit 11: P2 & P3 Page 1 of 5 ...read more.