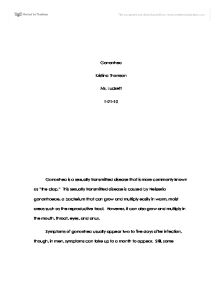 Gonorrhea Kristina Thomson Ms. Luckett 1-21-10 Gonorrhea is a s******y transmitted disease that is more commonly known as "the clap." This s******y transmitted disease is caused by Neisseria gonorrhoeae, a bacterium that can grow and multiply easily in warm, moist areas such as the reproductive tract. However, it can also grow and multiply in the mouth, throat, eyes, and a**s. Symptoms of gonorrhea usually appear two to five days after infection, though, in men, symptoms can take up to a month to appear. Still, some people have no symptoms at all. They may be entirely unaware that they have the desease, therefore do not seek medical attention. ...read more.

A yellowish-white discharge may ooze out of the urethra. Other symptoms in men incluce increased urination, red or swolled opening of p***s, tender or swollen testicles, and sore throat. Gonorrhea can become serious if left untreated. In females, the infection can move into the uterus, fallopian tubes, and ovaries. This can lead to scarring and infertility. Being infected with gonorrhea during pregnancy can cause problems for the baby, including meningitis and an eye infection that can result in blindness if it is not treated. In males, the disease can spread to the epididymis which can cause pain and swelling in the testicular area. This can create scar tissue that might make a man infertile. ...read more.

If a person's symptoms continue after treatment, they should return to the doctor to be reevaluated. The most effective way to avoid transmission of STDs is to abstain from s****l intercourse. Latex condoms, when used correctly, can reduce the risk of transmission of gonorrhea. Any genital symptoms such as discharge or burning during urination or unusual sore or rash should be a signal to stop having s****l intercourse and see a doctor immediately. If a person has been diagnosed and treated for gonorrhea, he or she should notify all recent partners so they can get medical attention and be treated. This will reduce the risk that the partners will develop serious complications from gonorrhea and will also reduce the person's risk of being re-infected. The person and all partners must avoid intercourse until they have completed their treatment for gonorrhea. ...read more.