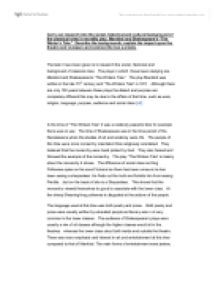 Carry out research into the social, historical and cultural background of the classical roles in morality play, Mankind and Shakespeare's "The Winter's Tale." Describe the backgrounds, explain the impact upon the theatre and compare and contrast the two periods. The task I have been given is to research the social, historical and background of classical roles. The plays in which I have been studying are Mankind and Shakespeare's "The Winters Tale." The play Mankind was written in the late 15th century and "The Winters Tale" in 1611. Although there are only 100 years between these plays the dialect and purpose are completely different this may be due to the affairs of that time, such as wars, religion, language, purpose, audience and social class[u1] . In the time of "The Winters Tale" it was a relatively peaceful time for example there was no war. The time of Shakespeare was in the time period of the Renaissance when the studies of art and anatomy were rife. The people of this time were more monarchy orientated than religiously orientated. ...read more.

Due to strict laws prohibiting any explicitly religions or current political events being represented on stage. Shakespeare had to be careful of what he included in his plays. This was bound to be frustrating for Shakespeare as he possibly wanted to write other plays about current affairs and religion but he couldn't as there was so much red tape so to speak Social class was also a big factor in Elizabethan and Jacobean times as is evident in "The Winter's Tale" when Florizel and Perdita are [u2] forbidden to so each other. King Polixenes also says it is fine to breed to types of flower although one is superior to the other. Although when it comes to royalty and a civilian coming together his view completely changes. Also women in society were seen as second class citizens and the inferior sex. From a young age they were taught to be meek and obedient although many women worked along side their husbands and fathers and also it was their duty to feed and clothe their families. ...read more.

There was evil poetry, prose and mercy poetry this play was expected t o be written by an educated person or a priest. Unlike Shakespeare mankind was performed rural areas they would tour local towns and villages. Although there were no theatres but the plays were performed either outside or in outside houses. The main forms of entertainment are jesters and religious festivals, the plays like mankind may have featured in the religious festivals as it is a morality play which teaches certain morals. Like mankind teaches good always triumphs over evil. The king of this time was Edward IV he was an extremely capable and daring military commander, Edward destroyed the House of Lancaster in a series of spectacular military victories; he was never defeated on the field of battle. The social divide was not as evident as in Shakespeare's time as there was more focus on religion rather than riches. Or it possibly wasn't evident in this play as it was focused on morals and the audience was a poorer audience. Whereas Shakespeare's play the winter's tale was based on the difference in social class and was written for richer people in theatres. ...read more.