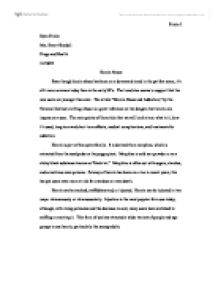 Ryan Frieler Mrs. Ewert-Knodell Drugs and Health 11/19/02 Heroin Abuse Even though heroin abuse has been on a downward trend in the pat few years, it's still more common today than in the early 90's. The trend also seems to support that the new users are younger than ever. The article "Heroin Abuse and Addiction," by the National Institute on Drug Abuse is a great reference on the dangers that heroin can impose on a user. The main points of the article that we will look at are: what is it, how it's used, long term and short term effects, medical complications, and treatments for addiction. Heroin is part of the opiate family. It is derived from morphine, which is extracted from the seed pods on the poppy plant. Morphine is sold as a powder or as a sticky black substance known as "black tar." ...read more.

Infectious diseases such as HIV and hepatitis B and C can be obtained through dirty needles. Substances that don't dissolve can clog blood vessels that lead to the brain, lungs, liver, and kidneys. This causes small patches of cells in the vital organs to become infected or die, which can result in arthritis or other rheumatologic problems. Other health effects can include collapsed veins, bacterial infections, infection of the heart lining and valves, and child birth complications in women. Heroin itself is one of the most addicting drugs of all. The addiction can take over the user's life. The addict will eventually come to a point where everything evolves around obtaining and using the drug. This is particularly devastating because everything else becomes insignificant. With the psychological dependence comes the physical dependence. This is characterized by withdrawal symptoms which begin to occur 24 to 48 hours after the last use. ...read more.

This can result in spread of HIV and other infectious diseases; also it can at the root of crimes and violence. Heroin can also indirectly affect people not associated with the drug. Everyday people may fall victims of crimes resulting from heroin. Law enforcement can be drawn away from their duties to respond to those crimes. The legislature may have to draw up new laws to deal with the problems. Tax money is spent to try to stop the spread of heroin use. Also, insurance premiums may increase with the rise of heroin addicts being admitted to costly treatment programs. Lastly, I must give my critique if this is a reliable source of information; which I can definitely say it is. This article is published by the National Institute on Drug Abuse which is a subdivision of the U.S. Department of Health and Human Services. Their web site lists related article and compiles facts and data on each individual drug. Each research article has a glossary of the key words listed throughout the article. ...read more.