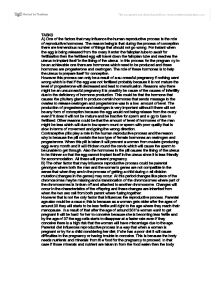 TASK3 A) One of the factors that may influence the human reproductive process is the role of reproductive hormones. The reason being is that during the process of conception there are tremendous number of things that should not go wrong. For instant when the egg is being released from the ovary it enter the fallopian tube to await for fertilisation then the fertilised egg will travel down the fallopian tube and reaches the uterus to implant itself in the lining of the uterus. In this process for the pregnancy to be an achievable one there are hormones which need to be produced and these hormones are progesterone and oestrogen. The role of these hormones is to help the uterus to prepare itself for conception. However this process can only be a result of a successful pregnancy if nothing went wrong which is that if the egg was not fertilised probably because it is not mature the level of progesterone will decreased and lead to menstruation. Reasons why there might be an unsuccessful pregnancy it is possibly because of the causes of infertility due to the deficiency of hormone production. This could be that the hormone that causes the pituitary gland to produce certain hormones that sends message to the ovaries to release oestrogen and progesterone was in a low amount of level. The production of progesterone and oestrogen is very important without it there will not be any form of conception because the egg would not being release from the ovary even if it does it will not be mature and be inactive for sperm and egg to fuse to fertilised. Other reasons could be that the amount of level of hormones of the man might be less which will due to low sperm count or sperm with poor quality that is slow in terms of movement and going the wrong direction. Contraceptive pills play a role in the human reproductive process and the reason why is because the pill contain the two type of female hormones an oestrogen and progesterone. ...read more.

Chromosomes is said to be a DNA packages so as it can fit in the nucleus of each cell. The way in which the DNA packaging is done is that starting with double helix of DNAand then the DNA is wrapped around some proteins and these proteins are tightly packed together and until it form a chromosome. Each chromosome has a centromere which divides into long and short arm cell during cell division. There are two types of chromosomes; the sex chromosomes which are two and these two are X and Y chromosomes that determine the sex of a person. The other type of chromosome is called autosomes which comprise the other 22 chromosomes. And altogether there are 23pairs of Chromosomes normally in human, 23 from the father and 23 from the mother in total 46 chromosomes. The behaviour of DNA in reproduction leads us to meiosis where the diploid cells divide into four haploid cells (gametes). At the end the product of meiosis has half the number of chromosomes which is 23 and this is due to the process of fertilisation when the egg and sperm fuse together to form a diploid cell called zygote. This zygote will have full set off 46 chromosomes, 23form the father and 23 from the mother in that way that how you get an individual. There is more to it than the gametes just the fusing together and produce an individual. Firstly the cells have to go through DNA replication and end up with two daughters cells (Mitosis) then after that the process of meiosis starts with four haploids cells. These have two genetic information from both parents, that has a unique offspring with unique characteristics. The way this occurs is that the 23 pairs of chromosomes pair up opposite and spilt into chromatids and this is where crossing over occurs the changing if genetic information. Then at the equator of the cells the chromosomes lined up and move to the opposite poles through the spindle fibres. ...read more.

Also the individual will be infertile since it one of the most common symptom because the testosterone levels are about half the normal value, they often don't make as much of the that hormone as other boys this will cause them to have less facial and body hair and may be less muscular than other boys. Expressing themselves could be a problem for them because of the trouble using language. This will affect the health wise of the ill person and his family member, friends and work colleagues is that the disorder may cause the individual to fit in amongst others because they might be shy due to the problem of using language. This person will only like to be in a world of his own because he would not see himself as a normal person. He will always be going for treatment to the hospital for testosterone replacement and being in separate group to work on their speech problem and how to be confident to face other people in society. Their family member will have to be around at all time help them around and make them feel as a normal person as for them to live as any normal person. When you get to the stage of employment, society might not consider them as normal so they might not get a job and discriminates against because of their disorder. They will not feel like how other men will feel like in a case where they cannot have children due to their infertility as compare to other men who can father a child. They won't be heard in society because society will see that as a receiver not a giver just because they do not give to society like working or doing other things that will contribute to society. Some places that they will go, they will not be accepted as for who they are which will cause them to withdraw and isolate themselves from others. ...read more.