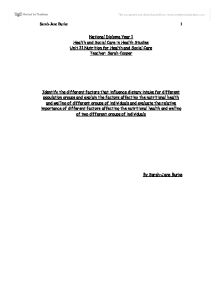 National Diploma Year 1 Health and Social Care in Health Studies Unit 21 Nutrition for Health and Social Care Teacher: Sarah Cooper Identify the different factors that influence dietary intake for different population groups and explain the factors affecting the nutritional health and welling of different groups of individuals and evaluate the relative importance of different factors affecting the nutritional health and welling of two different groups of individuals By Sarah-Jane Burke Not all new mothers are able to breast-feed their babies for a number of different reasons such as illness, lack of milk produced or simply personal choice. Infant formula will then be given as a replacement for breast milk. Most infant formulas are made from cows' milk that has been modified to make the protein, fat and carbohydrate similar to that of human milk. Some babies are intolerant to these formulas and are given 'hypoallergenic' milks. Milk intolerance is intolerance to either the protein component of milk or to lactose, which is a naturally-occurring sugar found in milk. Regular cows' milk does not provide nutrients needed by infants. In infants under 1 year of age, cows' milk should not be the main drink, as it is a poor source of iron. However, it can be a component of the weaning diet. These formulas can be expensive to buy, mothers or families on low income can received special vouchers entitling them to free or reduced price formula for their babies, so that all infants are provided with a suitable diet for their needs in growth and development. By six months of age, milk alone no longer fulfils the baby's nutrient needs, particularly for iron, and the process of weaning on to a solid diet should begin. ...read more.

During pregnancy their need to make sure that your diet is providing them with enough energy and nutrients for the baby to grow and develop, and for their bodies to deal with the changes taking place. Pregnant women are always advised to eat a well balanced diet and to include the following: Vitamin D 10mcg each day. Especially in winter months to prevent their child suffering from rickets. Women that are Asian origin who cover their skin when outside could be particularly short of vitamin D. Folic acid 400mcg each day from conception until the 12th week of pregnancy. Folic acid has been shown to reduce the risk of neural tube defects such as spina bifida. Iron Pregnant women can become deficient in iron, so they should make sure they have plenty of iron-rich foods. This is important to carry the oxygen around the body and to the unborn baby. Pregnant women also have to avoid certain foods because they can harm their unborn baby such foods as pate, raw meats and some canned fish. Nearly all pregnant women worry about weight gain when their pregnant and not losing it after pregnancy. This is due mainly to media pressure about yummy mummies and celebrities that lose their weight within weeks of having their babies. What a lot of women don't seem to realize is that all these women people to help them with this, either by looking after their baby or training them to lose the weight. Starving themselves of all the nutrients their bodies need to repair it self after such exhausting time. Not all pregnant women have the money to ensure they can eat a healthy diet. ...read more.

The media influences how they think and behave and as they grow older the influence becomes more powerful. It influences adolescence desires making them think that they need certain items to be popular or cool. Life on many television shows and movies is far from normal. They often glamorize potentially destructive behaviors like drinking, drugs, affairs, and intimate teen relationships. Female adolescence are more likely to be influenced by the media in food choices. Beauty plays a major role in their everyday life. This is encouraged by the media constantly bombarding them with messages of how we can beautify or modify our appearance, to fit the standard being portrayed through the media. The images seen are those of flawlessly slim females altered with techniques in order to create a perfect image. Adolescent girls struggle with the concept of the ideal body image and this can affect their self esteem, their relationship with family and friends and their health. I think possible religion is the least important factor that influences an adolescent's food choice. If a child from an early age is told that they are not allowed a certain type of food and told the real importance of these, it should stay with the child for the rest of their life, they will know what they can eat and where they can receive or buy this type of food. It is then up to the child if they wish to follow the rules of their religion, most will follow in their families beliefs but a small percent will rebel against it for their own reasons. This will effect all aspects of their religion and is something only them personal can choice to make, whether they choice to tell their families is also up to them. 1 Sarah-Jane Burke ...read more.