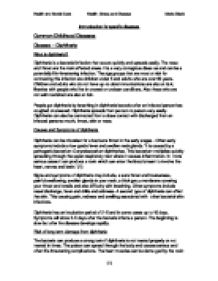 Immunisation for specific diseases Common Childhood Diseases Disease - Diphtheria What is diphtheria? Diphtheria is a bacterial infection that occurs quickly and spreads easily. The nose and throat are the main affected areas. It is a very contagious disease and can be a potentially life-threatening infection. The age groups that are most at risk for contracting this infection are children under 5 and adults who are over 60 years. Children and adults who do not have up-to-date immunizations are also at risk, likewise with people who live in crowed or unclean conditions. Also those who are not well nourished are also at risk. People get diphtheria by breathing in diphtheria bacteria after an infected person has coughed or sneezed. Diphtheria spreads from person to person very easily. Diphtheria can also be contracted from a close contact with discharged from an infected persons mouth, throat, skin or nose. Causes and Symptoms of diphtheria Diphtheria can be mistaken for a bad sore throat in the early stages. Other early symptoms include a low-grade fever and swollen neck glands. 'It is caused by a pathogenic bacterium Corynebacterium diphtheriae. This bacterium multiplies quickly spreading through the upper respiratory tract where it causes inflammation. In more serious cases it can produce a toxin which can enter the blood stream to involve the heart, nerves and brain.' (1) Signs and symptoms of diphtheria may include, a sore throat and hoarseness, painful swallowing, swollen glands in your neck, a thick grey membrane covering your throat and tonsils and also difficulty with breathing. Other symptoms include nasal discharge, fever and chills and sickness. A second type of diphtheria can affect the skin. This causing pain, redness and swelling associated with other bacterial skin infections. Diphtheria has an incubation period of 2-5 and in some cases up to 10 days. Symptoms will show 2-5 days after the bacteria infects a person. The beginning is slow but after the disease develops rapidly. ...read more.

Persons with wounds that are deep or dirty may need a tetanus booster shot if more than 5 years have passed since the last dose. An injection of tetanus immune globulin (TIG) given as soon as possible after a tetanus-prone injury can also help neutralize the poison that has not entered the nervous system. Age group vaccine recommended for A vaccine against tetanus has been available for many years. The vaccine is usually given to children in a combination with diphtheria and pertussis vaccines this is called a DTaP vaccine. There are two other vaccines that protect against tetanus as well as diphtheria but not pertussis like the DTP, these other vaccines are call the DT and Td vaccines. The DTaP can be given to children less than 7 years old and it is normally injected into the arm or the thigh. Duration of immunity The vaccine for tetanus (DTaP) should be given by the age of 18 months, and the child should then receive a booster shot between the age of 4-6 years. After that a recommended booster shot should be given every 10 years to keep providing protection. Disease - Measles What are measles? The cause of measles is by an infection with the measles virus. It is a highly contagious viral disease and can be noticed by its red spots followed by a rash. It mainly occurs in children. However adults who get measles are more likely to be ill longer than children. Measles can also be very serious. Causes and symptoms of measles Measles are caught when a person breathes in tiny droplets that contain the measles virus. The disease is caused by the virus attaching to linings of airways and multiplying, as the virus lives in the back of the throat and lungs then spreads through the remaining parts of the body through the blood. Measles can also be caught from people who are infected with measles already by being in direct contact with fluid from the mouth or nose of the infected person. ...read more.

When a woman who is pregnant catches the rubella virus and it is likely to spread to the foetus and cause congenital rubella syndrome, effects of this include defects to the brain, eyes such as blindness, ears such as deafness and the heart. It can also lead to a miscarriage and a still birth. A blood test should be done when a woman is pregnant to find out whether she is protected against rubella. The chances of other people developing complications from rubella, depends on those who have a weakened immune system, such as people who have conditions such as HIV or leukaemia. What may happen if you are not immunised Side effects of immunisation The MMR vaccine which protects against rubella as well as measles and mumps is made using live weakened strains of measles, mumps and rubella viruses. Mild side effects normally occur within 7-12 of the vaccination being received if there are going to be any, these side effects of this MMR vaccine can include fever, swelling to the gland in the cheeks as well as a mild rash. There may be some moderate side effects such as pain and stiffness in the joints or a seizure caused by fever, chances of a serious allergic reaction is rare. Age group vaccine is recommended for All children should be vaccinated to be protected from rubella and given the MMR vaccine which not only protects them from rubella but also measles and mumps. It should not be given to children under the age of 12 months because the antibodies that they received from their mothers before their birth may interfere with the effectiveness of the MMR vaccine. With a first dose of the MMR vaccine being given after the age of 12 months with a second dosage being given when the child is 4-6 years of age. Duration of immunity The immunity for the MMR vaccine appears to be long-lasting and may even be lifelong. ?? ?? ?? ?? Health and Social Care Health, Illness and Disease Maria Diack [1] ...read more.