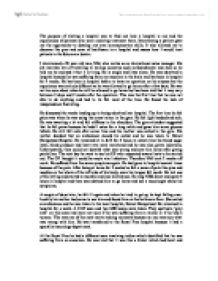 Interviewing a patient at hospital to develope personal communication skills and understanding of hospital proccedures.

The purpose of visiting a hospital was to find out how a hospital is run and the experiences of patients who were receiving treatment there. Interviewing a patient gave me the opportunity to develop my own communication skills. It also allowed me to discover the pros and cons of healthcare in a hospital and assess how I would treat patients in the future as a doctor. I interviewed a 29 year old man, NM, who works as an international sales manager. His job involves lots of travelling to various countries such as Scandinavia and Asia so he told me he enjoyed it but it is tiring. He is single and lives alone. He was admitted in hospital because he was suffering from an aneurism in the brain and has been in hospital for 3 weeks. He has been in hospital before to have an operation on his sinuses but the experience was entirely different as he was allowed to go home after a few days. He was not too sure about when he will be allowed to go home but has been told that it may vary between 2 days and 2 weeks after the operation. ...read more.

A couple of days later, he felt ill again and when he tried to get up he kept falling over. Luckily his mother had come to see him and found him on the bathroom floor. She called an ambulance and he was taken to his local hospital, Hemel Hampstead. He remained in hospital for a week. A CAT scan and two MRI scans were taken. They spotted a 'grey area' on this scan and were not sure if he was suffering from a stroke or if he had a tumour. This was one of the most nerve racking moments because no one was sure what was wrong with him. He was transferred to the Royal Free hospital because it had a specialist neurology department. At the Royal Free he had a different scan involving iodine which identified that he was suffering from an aneurism. He was told that it was like a blister which had burst and caused the symptoms which he was suffering from. He felt the care that he was receiving was excellent and he especially acknowledged the fact that everything was explained well. ...read more.

I had never been admitted in hospital and so the interview allowed me to empathise with the patient and question what I would feel if I was in his shoes. If I was in a position where I could not do anything for myself and had no choice but to look at a white hospital ceiling for hours, how would I feel? The patient reflected that most of the healthcare professionals tried to make his stay as bearable as possible and appreciated their hard work. The underlying point that has been emphasised is that communication skills are very important because the patient will gain some reassurance if they understand what is wrong with them, why certain tests are being down and why they have chosen a certain type of treatment to resolve it. I also discovered that the patient was cared for by many different healthcare professionals, nurses, doctors, surgeons, technicians who took the various test also between primary care ( the GP), secondary care (Hemel Hampstead hospital) and tertiary care (Royal free because it has a specialist neurology department). This network of information has to be sustained by various types of communication such as verbal or written and is important so that patients can be treated effectively. ...read more.