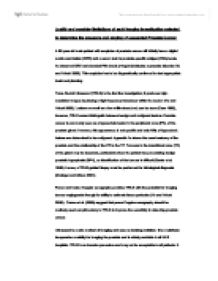 Justify and consider limitations of each imaging investigation selected to determine the presence and staging of suspected Prostate Cancer.

Justify and consider limitations of each imaging investigation selected to determine the presence and staging of suspected Prostate Cancer A 65-year-old male patient with suspicion of prostate cancer will initially have a digital rectal examination (DRE) and a serum test for prostate-specific antigen (PSA) levels. An abnormal DRE and elevated PSA levels (>4ng/ml) indicates a prostate disorder (Yu and Hricak 2000). This suspicion has to be diagnostically confirmed to start appropriate treatment planning. Trans-Rectal Ultrasound (TRUS) is the first line investigation; it produces high-resolution images by placing a high frequency transducer within the rectum (Yu and Hricak 2000). Lesions as small as a few millimetres (mm) can be seen (Cass 1992), however, TRUS cannot distinguish between benign and malignant lesions. Prostate cancer is commonly seen as a hypoechoic lesion in the peripheral zone (PZ), of the prostate gland. However, this appearance is not specific and only 40% of hypoechoic lesions are determined to be malignant. Appendix 1a shows the zonal anatomy of the prostate and the relationship of the PZ to the TZ. Tumours in the transitional zone (TZ) of the gland may be isoechoic, particularly when the patient has pre-existing benign prostatic hyperplasia (BPH), so identification of the tumour is difficult (Baxter et al. 1999). ...read more.

2003). The endorectal coil is often used in conjunction with a surface pelvic coil; this results in poor image quality of information received from the pelvic coil. This is because, as well as imaging anatomical structures within the pelvis, the endorectal coil is also imaged in situ, resulting in streaking artefacts on the image. When the endorectal coil is used on its own, there is less coverage of the pelvic area with the field of view limited to the prostate gland, seminal vesicles, bladder and close structures. However, the image resolution is very good. A study by Tewari et al. (2000) included 73 patients with biopsy- proven Prostate cancer who were examined by endorectal coil MRI. It concluded that the overall accuracy in defining local tumour stage was 82%, which suggests that endorectal MRI is an accurate method for local staging. Table 1 summarises the sensitivity and specificity found by the study. Endorectal MRI diagnosis Sensitivity (%) Specificity (%) Capsular penetration 95 82 Seminal Vesicle invasion 80 93 Table 1: The sensitivity and Specificity of endorectal MRI (Tewari et al. 2000) MRI has very good spatial resolution and tissue contrast. ...read more.

Radionuclide bone imaging is quick, relatively inexpensive and widely available (Love et al. 2003). The radiological appearance is of multiple sclerotic deposits. False positive results occur due to Paget's disease and Osteoarthritis, which are prevalent in this age group (Merrick 1998). Love et al. (2003) suggest that Single Photon Emission Computed Tomography (SPECT) is useful in differentiating between metastases and Osteoarthritis in the spine. Sections of vertebrae can be examined on transaxial, coronal, sagittal and three-dimensional structures, which facilitates both localisation and characterisation of an abnormality. Yu and Hawkins (2000) suggest that plain films are useful, for selective bones, to evaluate inconclusive findings on the bone scan. False negative results can occur due to residual radioactivity in the bladder and underclothes, which can obscure parts of the pelvis (Merrick 1998). In conclusion, TRUS-guided biopsy is the first line investigation to diagnose a suspected prostate cancer. MRI is used to stage biopsy proven carcinoma and evaluate ECE and SVI. CT can be used where MRI is contraindicated, or to evaluate spread in advanced stages >T3. RNS is used in advanced stages to evaluate bone metastases in patients with skeletal symptoms or PSA levels >15ng/ml. All these investigations have their limitations, but their benefits result in successful evaluation of prostate cancer, leading to the best method of treating the patient. ...read more.