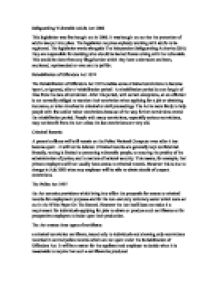 Safeguarding Vulnerable Adults Act 2006 This legislation was first bought out in 2006. It was bought out so that the protection of adults was put into place. The legislation requires anybody working with adults to be registered. The legislation works alongside The Independent Safeguarding Authority (ISA) they are responsible for deciding who should be barred fromw orking with the vulnerable. This would be done from any illegal action which they have undertaken and been, cautioned, reprimanded or even sent to jail for. Rehabilitation of Offenders Act 1974 The Rehabilitation of Offenders Act 1974 enables some criminal convictions to become 'spent', or ignored, after a 'rehabilitation period'. A rehabilitation period is a set length of time from the date of conviction. After this period, with certain exceptions, an ex-offender is not normally obliged to mention their conviction when applying for a job or obtaining insurance, or when involved in criminal or civil proceedings. The Act is more likely to help people with few and/or minor convictions because of the way further convictions extend the rehabilitation period. People with many convictions, especially serious convictions, may not benefit from the Act unless the last convictions are very old. Criminal Records A person's offence will still remain on the Police National Computer even after it has become spent - it will not be deleted. Criminal records are generally kept confidential. ...read more.

From 1st April 2002, the NCSC became responsible for the registration and inspection of all care homes and private healthcare facilities in England. All these facilities are now categorised as either "Care Homes" or "Independent Hospitals". For those in the mental health sector, which were previously known as "Mental Nursing Homes" will now be "Independent Hospitals" this also includes Independent Psychiatrict Hospitals. The purpose of the new regime is to create consistency implementing the legislation and the application of this to the independent health and care sector. Previously, where the function had been undertaken by the various health authorities, there was a significant variation across the country in the application and interpretation of the legislation and the intention is now to create some consistency through the NCSC. Mental Health Act 1983 The main purpose of the Mental Health Act 1983 is to allow compulsory action to be taken, where necessary, to make sure that people with mental disorders get the care and treatment they need for their own health or safety, and for the protection of other people. It sets out the criteria that must be met before compulsory actions can be taken, along with protections and safeguards for patients. Part 2 of the Act sets out the civil procedures under which people can be detained in hospital for assessment or treatment of mental disorder. Detention under these procedures normally requires a formal application by either an Approved Mental Health Professional (AMHP) ...read more.

An excellent summary of key legislation that protects vulnerable adults. On the whole the description on each Act is accurate. I would suggest however that the writer confirms in what way an individual can decide what is recorded on their CRB form - this is not my understanding.

Also, for each Act give a brief explanation of a key aspect of it that relates to the protection of vulnerable adults - this is not done for the Race Relations Act for instance. The writing style was good overall.
4/5