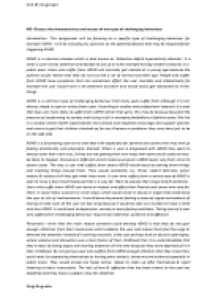 M1- Discuss the characteristics and causes of one type of challenging behaviour. ADHD.

﻿Unit 27,m1,group3 M1- Discuss the characteristics and causes of one type of challenging behaviour. Introduction: This assignment will be focusing on a specific type of challenging behaviour for example ADHD. I will be including my opinions on the potential factors that may be responsible for triggering ADHD. ADHD is a common disease which is also known as ?Attention deficit hyperactivity disorder?, it is when a user craves attention and decides to act up on it for example having random outbursts in a public area. Users who suffer from ADHD will normally get noticed at a young age because the parents would realise that they do not act like a lot of normal kids their age. People who suffer from ADHD have symptoms that can sometimes affect the user mentally and intellectually for example the user would have a lot attention duration and would easily get distracted by minor things. ADHD is a common type of challenging behaviour that many users suffer from although it is not always simple to spot or notice from users. ...read more.

They would constantly cry, throw violent tantrums, panic attacks & outburst till they get what they want. A user who suffers from a severe case of ADHD is seen to have a foul mouth because that is a way for them to express their anger and frustrations. Users who suffer from ADHD can leave an impact and affect their Parents and carers who care for them. It could make a parent or carer angry which could result in abuse or anger that could leave the user at risk of maltreatment. It could leave the parents feeling a sense of regret and sadness of having to take care of the user all day long because it could be seen as a burden to have a child who has ADHD. It could lead to depression, anxiety or even feeling worthless. Taking care of a user who suffers from challenging behaviour requires full attention, patience and affection. Personally I think that the main reason someone could develop ADHD is that they do not gain enough attention from their loved ones which saddens the user and makes them feel the urge to demand the attention instead of it coming naturally. ...read more.

Users could be referred to therapist and psychologists that are qualified in specialising in ADHD, they could for example teach the user to put all there hyper energy into positive tasks for example accomplishing tasks. ?Stimulant? is a common cure for ADHD it works by relaxing and calming down individuals. The stimulant comes in all types in order to suit the individual for example pills, injections, liquid drinks, drops etc? Furthermore I feel that the main factor that could be blamed for ADHD happening is the family unit. Users are the reflection and replicate of how they were brought up and their surroundings. If you as a parent and carer do not show love and affection or meet the basic needs of a user then it could leave impacts on a user for example developing ADHD. Although parents cannot always be blamed because they probably were brought up with the same strict upbringing where showing love and affection could be seen as weak and embarrassing according to some races and cultures. http://www.webmd.boots.com/add-adhd/tc/attention-deficit-hyperactivity-disorder-how-common-is-ithttp:// , www.nimh.nih.gov/health/publications/attention-deficit-hyperactivity-disorder/how-is-adhd-treated.shtml, http://www.helpguide.org/mental/adhd_add_parenting_strategies.htm Kinga Boguszko ...read more.