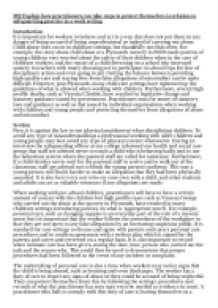 ﻿M2 Explain how practitioners can take steps to protect themselves in relation to safeguarding practice in a work setting Introduction It is important for workers to behave and act in a way that does not put them in any danger of being accused of being unprofessional or indeed of carrying out abuse. Child abuse does occur in childcare settings, but thankfully not that often. For example, the story about child abuse at a Plymouth nursery in 2009 made parents of young children very worried about the safety of their children when in the care of childcare workers, and the report of a child drowning on a school trip increased anxiety in teachers with many choosing not to participate in school trips for fear of disciplinary action and even going to jail. Getting the balance between providing high quality care and staying free from false allegations of misconduct can be quite difficult. However, post Plymouth, many child care settings have tightened up the guidelines of what is allowed when working with children. Furthermore, several high profile deaths, such as Victoria Climbie, have resulted in legislative change and statutory guidance issued by government. Practitioners must be aware of statutory laws and guidance as well as that issued by individual organisations when working with children and young people and protecting themselves from allegations of abuse and misconduct. ...read more.

worker who completed the form, such as the senior designated officer, had acted professionally and they, themselves, would then be in the clear if they faced disciplinary proceedings. They would also be much less likely to feel the wrath of an angry public. In the case of Baby P, practitioners who had been perceived as not following procedures correctly even had to leave their own homes because of fears of attack from the public. When completing the referral form it is important that the practitioner studies the form guidance and makes sure that all sections are completed properly. For example, including the date and time of referral will protect the worker by showing that they did actually refer the case at the proper time. Also, the reason for referral should be completed accurately. The duty of care in nurseries extends to making sure that children are not left in soiled nappies or pull ups and that they are fed and given water and kept free from danger. It is important therefore to make sure that all procedures are followed correctly and that proper equipment is used. The Health and Safety at Work Act 1974 is a key law which governs the safety of children when in the care of childcare settings and there are particular areas where practitioners need to be extra vigilant with their duties. ...read more.

For example, they may hear about divorces, affairs, illnesses, money problems, drug addictions, abuse, as well as other snippets of personal and sensitive information. Conclusion The abuse and the safeguarding of children has become a central political topic which quite often receives widespread media attention when tragedies and scandals occur. Media coverage then intensifies the need for political action. The ramifications that this has for practitioners is that they are constantly under the gaze of the public. Any errors made by a practitioner could have serious consequences for them. As well as being disciplined a worker can face losing their job, become local and even national news, and end up being placed on barred lists and never allowed to work with children again. In some cases the practitioner may even receive a custodial sentence. The changes that have occurred recently in childcare protocols have been huge and at times confusing. For example, Penny Tassoni, president and Professional Association for Childcare and Early Years (PACEY) and author of many books on child development believes ?it is actually the duty of anyone working with young children to offer physical contact? However, in today?s litigious society practitioners must be very careful of how they work with children and young people so that they can protect themselves from any accusations of misconduct. It is important for practitioners to always follow the procedures of the organisation, to know about the issues of confidentiality and to report and record all important matters in the correct way. ...read more.