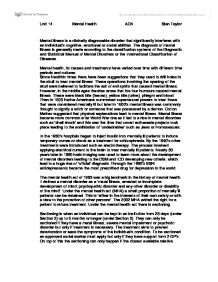 Mental illness is a clinically diagnosable disorder that significantly interferes with an individual's cognitive, emotional or social abilities. The diagnosis of mental illness is generally made according to the classification systems of the Diagnostic and Statistical Manual of Mental Disorders or the International Classification of Diseases. Mental health, its causes and treatments have varied over time with different time periods and cultures. Since Neolithic times there have been suggestions that they used to drill holes in the skull to treat mental illness. These operations involving the opening of the skull were believed to facilitate the exit of evil spirits that caused mental illness. However, in the middle ages theories arose that the four humours caused mental illness. These were black bile (faeces), yellow bile (urine), phlegm and blood. Then in 1600 Native Americans summoned supernatural powers to treat those that were considered mentally ill but later in 1600's mental illness was commonly thought to signify a witch or someone that was possessed by a demon. Cotton Mather suggested that physical explanations lead to mental illness. Mental illness became more common after World War one as it led to a rise in mental disorders such as 'shell shock' and this was the time that covert euthanasia projects took place leading to the annihilation of 'undesirables' such as Jews or Homosexuals. In the 1930's hospitals began to inject insulin into mentally ill patients to induce temporary comas or shock as a treatment for schizophrenia. ...read more.

Also, this definition also relies on context, time and culture. The last definition developed by Jahoda is deviation from Ideal Mental Health. She looked at health rather than illness. She considered is the person suffering, are they a danger to themselves or others, is the person in control of their behaviour, does the behaviour they display make others feel uncomfortable and do they communicate rational thoughts. This is the best definition as it focuses more on the individual rather than grouping all disorders together. However, the main limitation of this is that it still depends on who decides whether they have a mental illness. In conclusion, it is difficult to define mental illness as every person is individual and some aspects of the illness could be related to their past. Also, it is hard to define what normal is making it extremely hard to diagnose a disorder. Finally, there are that many different mental disorders that it takes a while to diagnose as it is impossible to clump them together. Therefore, I feel that it is very difficult to define mental illness and is a long and detailed process. Throughout time derogatory terms have been used to label mentally ill people. These terms were used because they were picked up off the family through primary socialisation. An example of someone that has been portrayed negatively is Frank Bruno. ...read more.

They were a group of journalists that worked specifically with people that have mental illnesses. They have a number of aims. They are: * To acheieve an accurate portrayal in the media. For example in 2006 stories came out of David Beckham having an OCD where all his shoes and tins in the cupboard have to be lined up straight. Also, it was stated that he only wears new boxers and has several showers a day. However, he wouldn't be defined as having mental illness as he can still function adequately and also it is situational. He is a footballer and is very active as a consequence he may just like to feel clean after playing sport. * To reduce the use of emotive words such as 'nutter' or 'spaz' and use more politically correct words to change people's attitudes. * Show Mental Health more positively to change the publics opinion of mentally ill * Hold Mental Health day to inform the public and show how common mental illness is * Hold campaigns such as the Respect campaign which challenges anti social behavoiur and it's causes leading to a more positive image of mental health SANE is a mental health organisation that campaigns to combat stigma and ignorance and improve care, giving nearly 400 interviews each year on national and local television and radio, generating hundreds of column inches in the press and participating in government and professional initiatives. This allows them to tackle the negative image that mentally ill people are asscoiated with. ...read more.