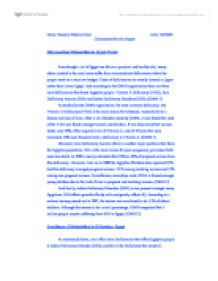 Name: Bassem Hisham Omar Date: 02/20/04 Community Service Report Micronutrient Malnutrition in Egypt (Facts) Even though a lot of Egyptians follow a practical and healthy diet, many others located in the rural areas suffer from micronutrient deficiencies where the people work on a very low budget. Cases of deficiencies are mostly located in Upper rather than Lower Egypt. And according to the OMNI organization there are three main deficiencies that haunt Egyptian people: Vitamin A Deficiency (VAD), Iron Deficiency Anemia (IDA) and Iodine Deficiency Disorders (IDD). (OMNI 1) As studied by the OMNI organization, the most common deficiency, the Vitamin A Deficiency (VAD) is the main reason for blindness, vulnerability to a disease and loss of lives. After a lot of studies made by OMNI, it was found that most of the VAD was found amongst women and children. ...read more.

Although this seems to be a small percentage, OMNI suspected that 3 million people may be suffering from IDD in Egypt. (OMNI 2) Case Study of Malnutrition in El Doweiqa-Egypt As mentioned above, one of the main Deficiencies that affect Egyptian people is Iodine Deficiency Disorder (IDD); and this is the Deficiency that struck El Doweiqa in Egypt and caused many problems in that region according to a project made by an anonymous team. El Doweiqa, a settlement located near Mansheyet Nasser is in danger due to the major problems of IDD in that area. Part of this problem has to do with the salt the residents intake, which has no presence of Iodine and is made up from the dried constituents of the garbage and sewers. Due to this, people at El- Doweiqa lack the required intakes of Iodine and are vulnerable to diseases like lead poisoning, cancers, problems in the kidney, heart attacks and even death. ...read more.

Instead he claimed in a casual mood "If I had complained it would have gone nowhere."( El Noshokaty 1) Another example made by the same Al-Ahram News report was about a wife called Ghada Mohamed. She got a case of food poisoning after digesting a can of false beef and realized that she should check the expiration date on the can due to the untrustworthiness of the sellers. When she was told to take action against the company, she remarked: "I have neither the time nor trust on the system. I know that my rights are non existent within the current system. I leave it to God." ( El Noshokaty 1) These two examples emphasize the failure of the system to solve problems of malnutrition, making the Egyptian population in desperate need for a solution. ...read more.