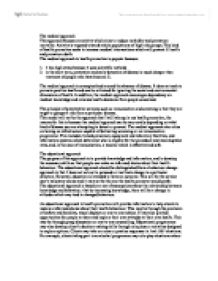 Models and approaches to health promotion

The medical approach This approach focuses on activity which aims to reduce morbidity and premature mortality. Activity is targeted towards whole populations of high-risk groups. This kind of health promotion seeks to increase medical interventions which will prevent ill health and premature death. The medical approach to health promotion is popular because: 1. it has high status because it uses scientific methods 2. in the short term, prevention and early detection of disease is much cheaper than treatment of people who have become ill. The medical approach is conceptualised around the absence of disease. It does not seek to promote positive health and can be criticised for ignoring the social and environmental dimensions of health. In addition, the medical approach encourages dependency on medical knowledge and removes health decisions from people concerned. The principle of preventative services such as immunisation and screening is that they are target to groups at risk from a particular disease. This model will not be the approach that I will take up in my health promotion, the reasons for this is because the medical approach can be very costly depending on what kind of disease you are attempting to detect or prevent. ...read more.

Information alone is, however, insufficient to change behaviour and, even the desire and ability to change behaviour is no guarantee that the individual will do so. I have chosen to use this approach in my health promotion. Most people respond well to this approach as it lets them know what they need and therefore encourages and assists them in making these lifestyle changes without the need to force them, since they will go about them out of their own will. Empowerment The World Health Organisation defined health promotion as enabling people to gain control over their lives (WHO 1986). This approach helps people to identify their own concerns and gain the skills and confidence to act upon them. It is unique in being based on a 'bottom-up' strategy and calls for different skills from the health promoter. Instead of the expert role adopted by the other approaches, the health promoter becomes a facilitator whose role is to act as a catalyst, getting things going, and then to withdraw from the situation. Self-empowerment is used in some cases to describe those approaches to promoting health which are based on counselling and which use non-directive, client-centred approaches aimed at increasing people's control over their own lives. ...read more.

This means the focus is on changing society, not on changing the behaviour of the individuals. This may be summed up in the phrase 'to make the healthy choice the easier choice'. A healthy choice is available, but to make it a realistic option for most people it requires changes in its cost, availability or accessibility. The social change is targeted towards groups and populations, and involves a top-down method of working. For such a policy to be successfully implemented, however, it has to be supported by a public who have been made aware of its importance. For most health promotion workers, the scope for this type of activity will be more limited than for the traditional medical or behavioural change approaches. The reason that I will not be using this approach is because the societal change approach has the objective to change the society, by putting health on the political agenda at all levels through campaigns and laws passed by the government in order to prevent people from taking such actions which can damage their health. and to the importance of shaping the environment rather than shaping the individual lives of the people who live in it. Using such an approach to promote increased physical activity would be much more effective and significant but I will not be capable of changing the behaviour of people at such a large scale. ...read more.