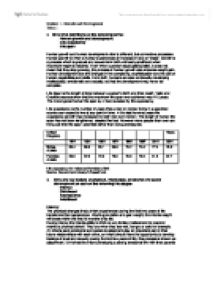 1. Give brief definitions of the following terms: * Human growth and development * Life expectancy * Life span Human growth and human development refer to different, but connective processes. Human growth is when a human experiences an increase in size or 'mass'. Growth is a process which is gradual and occurs form birth until early adulthood when maximum height is reached. Even when a person stops getting taller, it does not mean that they stop growing, the process of human growth also includes weight gain. Human development are the changes in the complexity, sophistication and the use of human capabilities and skills. Form birth, humans are also continually developing intellectually, emotionally and socially, so that the development may never be complete. Life Span is the length of time between a person's birth and their death. Valid and Credible sources show that the maximum life span ever achieved was 115 years. The more typical human life span is, in fact revealed by life expectancy. Life expectancy is the number of years that a man or woman living in a specified country can expect to live at any point in time. In the last hundred years life expectancy at birth has increased for both men and women. The length of human life span has not been lengthened, despite this fact. However more people than ever are living out their life span potential rather than dying prematurely. ...read more.

3. Briefly explain why adolescence is called a transitional stage and give supporting examples (approx 150 word) Adolescence is the stage of maturation between childhood and adulthood. The term denotes the period from the period of puberty to maturity; it usually starts at about age 14 in males and age 12 in females. The transition to adulthood varies among cultures, but it is generally defined as the period when individual begin to function independently from their parents. Adolescence is the stage when individuals begin to think in more complex ways and in addition to this, language skills and memory becomes greater. During adolescence the ability to think about things that they are not directly experienced with becomes evident even though this ability is not evident during earlier years. 4. Briefly explain the structure of DNA and discuss what roles genes play in growth, development and determining characteristics (approx 250 words) A baby is made up of two different, but now combined, sets of genes. Each cell of the babies body is a microscopic compartment that houses a chemical ribbon known as DNA. DNA is deoxyribonucleic acid which occurs in the nuclei of cells, is the material that makes up genes and consists of long chains typically paired in a double helix. DNA provides the information to enable the human body to work. Each cell in the human body contain genetic information needed by the whole body, DNA tell each cell to use only the information needed, for example it tells brain cells to behave like brain cells and skin cells to behave like skin cells. ...read more.

8. Name the three definitions of health promotion and briefly describe each one (approx 200 words) Health promotion is a range of social, educational and psychological strategies that are used to motivate people to improve and maintain their standards of personal health and wellbeing. There are three definitions of health promotion these being negative, positive and a whole society approach. Health education is sometimes based on a negative, biomedical understanding of health for example, informing people about the dangers of smoking, aims to keep them 'healthy' by ensuring that they avoid developing lung cancer etc. Health-promotion activity that aims to promote health improvement through behaviour change generally adopts a positive approach to 'health'. Campaigns that encourage people to stop smoking, eat fewer fatty foods and to do more exercise are all part of the health improvement approach. They are based on the belief that 'health' is a positive state that can be acquired through individuals changing their behaviour and living in a 'healthy' way. A 'whole society' approach, or collective approach, to health promotion is often the one adopted by governments. The collective approach moves health promotion away from the level of personal responsibility and individual activity. Governments may try to promote the health of a whole nation, or a significant part of the population, through legislation. Examples include laws that make the wearing of seatbelts compulsory, laws that make pollution of the air and water supply illegal and policies that ensure children form low income families get free school meals. Module 1 - Growth and Development TMA 1 ...read more.