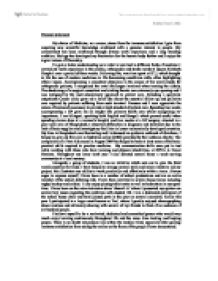 My choice of Medicine, as a career, stems from the immense satisfaction I gain from acquiring new scientific knowledge combined with a genuine interest in people. My commitment

Personal statement My choice of Medicine, as a career, stems from the immense satisfaction I gain from acquiring new scientific knowledge combined with a genuine interest in people. My commitment has been reinforced through diverse work experience and a long standing ambition. Biology has developed my fascination for the human body further and I enjoy the logical nature of Chemistry. To gain a better understanding as to what is involved in different fields of medicine I carried out work experience in the cardiac, orthopaedic and stroke wards at Queen Elizabeth Hospital over a period of three weeks. Following this, was time spent at ITU, which brought to life the use of modern medicines in life threatening conditions while often highlighting ethical issues. ...read more.

I am bilingual, speaking both English and Bengali which proved useful when spending eleven days at a women's hospital and two weeks at a GP surgery, situated in a poor rural area of Bangladesh; I observed difficulties in diagnosis and treatment due to the lack of basic supplies and investigatory facilities in lesser economically developed countries. My time in Bangladesh was fascinating and I witnessed an epidemic outbreak of diarrhoea, I helped to give out free oral re-hydration saline (ORS) provided by the Lutheran charity. The completion of a First Aid course in August 2004 has helped to hone at least some of the basic practical skills required to practise medicine. ...read more.

I have been on the asian television show 'shonali tv' where I presented my opinion on several key issues regarding the problems with student life. I am a dedicated participant of the school house choir and have played parts in the play on several occasions. Earlier this year I participated in a large event known as Taal, where I greatly enjoyed choreographing dance routines and ultimately dancing with several of my friends in front of an audience of six hundred people. I believe myself to be a motivated, dedicated and committed person who would very much enjoy learning continuously throughout life and the same time treating and helping people. There is no doubt my passion lies within the medical field, especially after gaining immense satisfaction from seeing the smiles on the faces of the people I have encountered. ?? ?? ?? ?? Rishad Awal L6Sa ...read more.