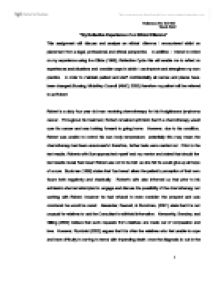 "My Reflective Experience of an Ethical Dilemma" This assignment will discuss and analyse an ethical dilemma I encountered whilst on placement from a legal, professional and ethical perspective. In addition, I intend to reflect on my experience using the Gibbs (1988), Reflective Cycle this will enable me to reflect on experiences and situations and consider ways in which I can improve and strengthen my own practice. In order to maintain patient and staff confidentiality all names and places have been changed (Nursing, Midwifery Council (NMC) 2002) therefore my patient will be referred to as Robert. Robert is a sixty four year old man receiving chemotherapy for his Hodgkinsons lymphoma cancer. Throughout his treatment, Robert remained optimistic that the chemotherapy would cure his cancer and was looking forward to going home. However, due to his condition, Robert was unable to control his own body temperature; potentially this may mean the chemotherapy had been unsuccessful therefore, further tests were carried out. Prior to the test results, Roberts wife Sue approached myself and my mentor and stated that should the test results reveal 'bad news' Robert was not to be told as she felt he would give up all hope of a cure. Buckman (1988) states that 'bad news' alters the patient's perception of their own future both negatively and drastically. Robert's wife also informed us that prior to his admission she had attempted to engage and discuss the possibility of the chemotherapy not working with Robert, however he had refused to even consider the prospect and was convinced he would be cured. ...read more.

Essentially the courses of action that could have been taken for Robert were to tell the truth or not, both positions could be morally justified, to tell the truth would enable Robert to be autonomous, however withholding the truth prevents Robert losing hope. Saunders (1991) however argues that healthcare professionals need to question whose needs they are seeking to meet. This is supported by McCarthy (1996) who states that healthcare professionals have a tendency to assume they know what there patients needs are. This made me feel that the Consultant and my mentor were colluding with Robert's wife and subsequently they were meeting her needs by withholding information thus ignoring Roberts's right to be autonomous. I therefore found that I was involved in a personal ethical dilemma related to veracity (truth telling) honesty and withholding information (Begley and Blackwood, 2000). Fry and Johnstone (2002) believe the principle of veracity lies with the individual not to deceive or tell a lie therefore tell the truth to others. Research in to truth telling and patient diagnosis carried out by Sullivan (2001) suggests that ninety-nine per cent of patients want to be informed of their diagnosis and felt that Doctors had an obligation to tell them the truth. However, ten Have and Clark (2002) argue that when diagnosis is imparted abruptly it can provoke denial, impair adaptation and psychologically harm the patient. ...read more.

I now believe that I was guilty of paternalism believing my own beliefs and values were right. I had assumed that Robert needed to know of his diagnosis if he was to be autonomous. To conclude I now realise that in terminal illness it can be question of when to inform the patient of 'bad news'. I believe that Robert was clearly not ready to accept the truth at that time therefore withholding information had been the right decision. Arguably Robert was autonomous, it was his decision to hope for a cure therefore it would have been unethical and morally wrong to take that away. However, the circumstances surrounding this decision could only be applied to Robert's situation. I believe that as a Nurse I will be involved in ethical dilemmas again however I feel that now I my decisions will be based on each unique patient recognising their own individual needs and wants. By using the Gibbs (1988) reflective framework cycle it has enabled me to analyse, question, move forward, learn and make sense of my actions. I am now aware that reflection is a continual learning process in nursing. Rather than condemn myself where I think I have failed I have been able to turn it in to a positive learning experience and apply this newly gained knowledge in to my future practises. ?? ?? ?? ?? Reference No: X01104 Words 2442 8 ...read more.