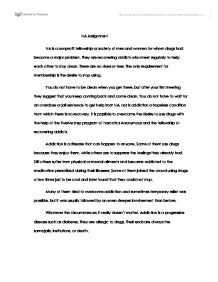 Narcotics anonymous. I went to an NA meeting on Monday April 11, 2011. There were around 30 people who attended the meeting. My perception was very changed. I always thought that Narcotic addicts would look a certain way or there is an archetype for addi

NA Assignment NA is a nonprofit fellowship or society of men and women for whom drugs had become a major problem. They are recovering addicts who meet regularly to help each other to stay clean. There are no dues or fees. The only requirement for membership is the desire to stop using. You do not have to be clean when you get there, but after your first meeting they suggest that you keep coming back and come clean. You do not have to wait for an overdose or jail sentence to get help from NA, nor is addiction a hopeless condition from which there is no recovery. It is possible to overcome the desire to use drugs with the help of the Twelve step program of Narcotics Anonymous and the fellowship of recovering addicts. Addiction is a disease that can happen to anyone. Some of them use drugs because they enjoy them, while others use to suppress the feelings they already had. Still others suffer from physical or mental ailments and became addicted to the medication prescribed during their illnesses. Some of them joined the crowd using drugs a few times just to be cool and later found that they could not stop. Many of them tried to overcome addiction and sometimes temporary relief was possible, but it was usually followed by an even deeper involvement than before. ...read more.

The second is to believe that a power greater than themselves could restore someone back to a better state. This would lead some to believe that there is some religious connotations, but to know that there is someone out there who is always willing to help under any circumstance is a fulfilling feeling. I think the purpose of this is not to promote a religious ideologue, but to provide a source to turn to when the addiction is at its worst. The third is to turn your entire will to God as is understood by the addict. This means that the addict puts the burden on God to help him. I like this one because it really, like the previous one, lays out the foundation that God is the one, whom reliance is needed. This is true in my life also, where I find that God is whom I rely on the most and is whom I need support from. The fourth is to make a fearless and thorough moral account of oneself. This means that one searches within himself and sees what may be right or wrong with one's actions and behaviors. I think that the step being referred to means that a person needs to see that what he has been doing is wrong in society and in order for the person to function correctly he/she must stop what they are doing. ...read more.

We were all afraid to let go of something that had become so important to us. It is a relief to discover that the only requirement for membership in NA is a desire to stop using." It touched me because this really states that this is the last hope for most of the attendents. At first, most of them were mistrustful and fearful trying a new way of doing things. About the only thing they were sure of was that their old ways were not working at all. Even after getting clean, things didn't change for them right away. Often even their usual activities, such as driving a car or using the telephone seemed frightening and strange, as if they had become someone they did not recognize. This is where the fellowship and support of other clean addicts really helps and they begin to rely on others for the reassurance they so desperately need. What I have learned from attending this meeting was that recovery does not stop with just being clean. As they abstain from all drugs (and yes this means alcohol and marijuana, too) they need to come face to face with feelings that they have never coped with successfully. They may even experience feelings they were not capable of having in the past. By far what is most true is that they must become willing to meet old and new feelings as they come. ...read more.