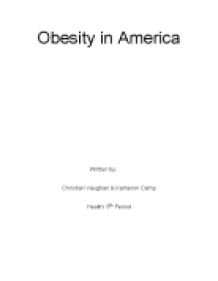 ﻿Obesity in America Written by: Christian Vaughan & Kameron Camp Health: 5th Period ________________ Obesity Obesity is one of the highest leading preventable causes of death worldwide. Obesity is found in all types of people, kids and adults. Over the days this preventable medical condition has increased year by year to what it is today. Obesity is usually caused by people having other problems like an eating disorder. While people try to deal with these problems they may end after eating and having a poor diet for a long time. There are Obesity solutions, but unfortunately people are not able to make proper use of the things that are given to them to help. You might think that the government should come into the picture, but it?s not that simple. There are already government sponsored organizations, but they don?t deal with the problem effectively and almost all of the organizations ?overlap? each other with the methods that they use. Each solution has its own way of getting rid of the problem which contradict with another method that you have tried in the past, which is why all the methods ?overlap? each other. ...read more.

Researchers have found that adults in the U.S. have a much higher rate of obesity than Canadians, according to the U.S. Centers for Disease Control and Prevention. The CDC found that 34 percent of Americans are obese compared to just 24 percent of those from Canada when they analyzed data from surveys taken from 2007 to 2009. This study is the first time the CDC has compared American obesity rates with another country. The report adds to a growing pile of studies that show Americans are less healthy than people in other developed nations. For example, a 2006 Harvard Medical School study found that Americans are 42 percent more likely than Canadians to have diabetes, 32 percent more likely to have high blood pressure, and 12 percent more likely to have arthritis. That study, based on telephone interviews rather than actual measurements, found about 21 percent of Americans said they were obese, compared with 15 percent of Canadians. That finding suggests Canadians and Americans share one characteristic ? they tend to understate their heft. Health Effects of Obesity: High blood pressure- Additional fat tissue in the body needs oxygen and nutrients in order to live, which requires the blood vessels to circulate more blood to the fat tissue. ...read more.

Respiratory problems associated with obesity occur when added weight of the chest wall squeezes the lungs and causes restricted breathing. Sleep apnea is also associated with high blood pressure. Cancer- In women, being overweight contributes to an increased risk for a variety of cancers including breast, colon, gallbladder, and uterus. Men who are overweight have a higher risk of colon and prostate cancers. Metabolic syndrome- The National Cholesterol Education Program has identified metabolic syndrome as a complex risk factor for cardiovascular disease. Metabolic syndrome consists of six major components: abdominal obesity, elevated blood cholesterol, elevated blood pressure, insulin resistance with or without glucose intolerance, elevation of certain blood components that indicate inflammation, and elevation of certain clotting factors in the blood. In the US, approximately one-third of overweight or obese persons exhibit metabolic syndrome. Psychosocial effects- In a culture where often the ideal of physical attractiveness is to be overly thin, people who are overweight or obese frequently suffer disadvantages. Overweight and obese persons are often blamed for their condition and may be considered to be lazy or weak-willed. It is not uncommon for overweight or obese conditions to result in persons having lower incomes or having fewer or no romantic relationships. Disapproval of overweight persons expressed by some individuals may progress to bias, discrimination, and even torment. ...read more.