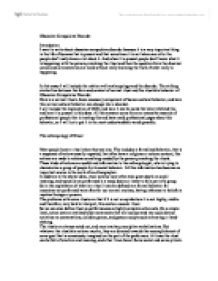 Obsessive Compulsive Disorder Introduction I want to write about obsessive-compulsive disorder because it is a very important thing in the life of humans that is present and that sometimes it is not taken care of or the people don't really know a lot about it. And when it is present people don't know what it is happening with the person provoking the ritual and then the question from the observer comes and commentaries are maid without really knowing the truth of what really is happening. In this essay I will include the relation with anthropology and the disorder. The striking similarities between the form and content of normal ritual and the ritualistic behavior of Obsessive Compulsive Disorder. How is a normal ritual a basic necessary component of human cultural behavior, and how this normal cultural behavior can change into a disorder. I will include the explanation of OCD, and how it can be cured the history behind this and how it is present in this days. All this answers come from an extensive research of professional people that is treating this and have maid professional pages about this behavior, so I will try to put it in the most understandable words possible. The anthropology of Ritual Most people know a ritual when they see one. This includes a formalized behavior, that is a sequence of actions usually repeated, that often have a religious or solemn content, this actions are made to achieve something needed by the person provoking the rituals. These kinds of actions are useful and informative to the anthropologist, who is trying to characterize a group of people by its social behavior. ...read more.

A recent variation in this treatment has included the use of computer simulation or guidance in exposure to behavior triggers. Pharmacotherapy The other major focus of treatment for OCD is medication based. The discovery in 1966 that clomipramine (anafabril) is effective in reducing OCD symptoms sparked a flood of research into neurobiology of OCD and its management with prescriptions drugs. The central role of SEROTONIN in OCD is now very important in the answer of why this actions are repeated and there is new types of medicine that have been created to the treatment of this disorder. The responses to drugs are remarkably different than those to only exposure and obviously the responses are better. The depressive patients treated with clomipramine show highly response rates, and require up to four weeks before improvement is measurable. Other drugs have subsequently been shown to be effective in the treatment of OCD. These drugs include fluvoxamine (luvox, faverin, Floxyfral), floxetine (Prozac), and sertaline (Zoloft). This drugs are good when perfoming the actions of the exposure of the trigger. And obviously all the individuals vary in their response to these drugs. Combined Approaches The most common recommendation is the combination of the types of therapy. Relapse is common upon withdrawal of the medication, suggesting the term for long term prescriptions; while cognitive-behavioral therapy is still effective even if administered in a time limited fashion. It should be emphasized that no "magic bullet" exists in the array of available treatment of OCD. Conclusion In my essay I gave a general explanation of what is OCD how it is created, how it is cured and the most important thing for ...read more.

People with OCD, however, never develop an "immunity" to the stimulus and continue to feel anxious. Over time, their anxiety develops into obsessions which, in turn, give rise to the compulsive behavior. Other theories focus on the psychological reactions to a traumatic incident during childhood, major stress. and a biological vulnerability that can be triggered by stress. Researchers have found that certain antidepressant medications help alleviate obsessive behaviors by increasing the amount of serotonin and improve communication between the nerve cells. Other than medication, behavior therapy has proven very successful in helping people with OCD overcome the anxiety that they feel if they do not complete their compulsions. In behavior therapy, a patient is exposed to the feared object or obsession, but prevented from completing the compulsive behavior. For example, people who fear contamination may be encouraged to touch dirty laundry and be denied the chance to wash their hands for a specified period of time. Most often, behavior therapy includes guidelines or a "contract" in which the patient and treatment team agree on certain goals. In conclusion, families may participate in therapy by attending information sessions about the situations that may cause symptoms to worsen and the ways that loved ones can help the patient overcome the illness. Often family members can help the patient honor the terms of the treatment contract, and can also help to identify whether the patient is experiencing emotional difficulties. It is important for family and friends to create a strong and supportive environment in which they learn to appreciate progress in their loved one's functioning and view small improvements as a success. ...read more.