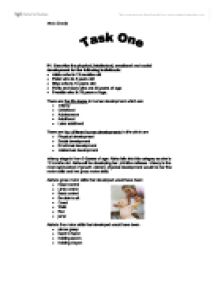 P1: Describe the physical, intellectual, emotional and social development for the following individuals: * Aisha who is 12 months old * Peter who is 5 years old * Miya who is 14 years old * Paris and Gary who are 35 years of age * Freddie who is 78 years of age. There are five life stages in human development which are: * Infancy * Childhood * Adolescence * Adulthood * Later adulthood There are four different human developments in life which are: * Physical development * Social development * Emotional development * Intellectual development Infancy stage is from 0-2years of age. Aisha falls into this category as she is 12 months old. Aisha will be developing her primitive reflexes. Infancy is the most rapid period of growth. Aisha's physical development would be her fine motor skills and her gross motor skills. Aisha's gross motor skills that developed would have been: * Head control * Limb control * Back control * Be able to sit * Crawl * Walk * Run * jump Aisha's fine motor skills that developed would have been: * pincer grasp * hand to hand * holding spoon * holding crayon During infancy Aisha will be developing the following physical changes: * growth of head and brain * growth of trunk and limbs * increase in weight and height Aisha's social development would be: Aisha would be very dependant on other people at this stage, particularly her main carer. When Aisha was born she was born into a family and they would have given her a sense of belonging; this is very important for their social development. Aisha may have friends but hasn't yet developed interacting with them yet as she is still young, but they would stand side by side and play. Cr�che and playgroups are important for children as they develop a group of friends and gain a sense of belonging in their community. ...read more.

When women grow older they become less inclined to fertilise eggs, this usually happens when they are between 45-55 years of age, when they are going through menopause. Many adults develop grey hair and occasionally in men they often loose their hair. Middle age spread affects both men and woman, this happens as they still eat the same amount of food but as they are less physically active it is hard for them to loose the weight. Paris and Gary's social development would be: Sometimes it is hard to keep in contact with good friends as a result of friends moving away, work; you have different commitments that take up a lot of time. But adults need time of their own to spend time with their friends to release tension that's building up on them and also to release the everyday stresses in life. This is the time when adults decide to get intimate partners and then marry, have children and build a life of their own through time. They also pursue their career ambitions. The combination of married life, children and work can build a lot of stress in trying to cope at home and create tension in the home. This may result in adult's relationships deteriorating and leading to divorce. Adults also may have to provide care for parents which, can be stressful for them as sometimes they feel torn between family, work and caring. Retirement usually occurs in the middle 50's particularly if they have been in the same job from their early 20's. Retirement for the adults is very important as it releases a lot of stress from people. Paris and Gary's emotional development are: At this stage in life the majority of people want to settle down with a partner and get married or else live long term with someone. They may also want to start a family. Although things can go wrong in relationships and it can lead to a marital breakdown. ...read more.

Freddie will have to learn a new skill on how to deal with death experiences. He will have to learn how to cope on his own if his partner dies. Freddie will have to deal with the impact of his loved one dying; this may involve how to keep socially active and try not to burden too much over this as this may result in him being isolated from the outside world. He also has to deal with the no longer vital occupational role and this can be very depressing for some of the older people. Role changes - Freddie will have to deal with the role change of his occupation. Also Freddie may well have to deal with becoming a grandparent, this may involve babysitting for his kids, this would take up some of Freddie's time, but would be in a good way, it would spare some of the time that he used to work. Financially Freddie may feel depressed. From the change of his monthly/weekly wages to pension may prove to be difficult in Freddie's life. Although he has the same outgoings, prices in our economy are increasing but the pension still stays the same. Freddie will have to learn how to manage his new income as the gap between them gets bigger. Many people threat coming to this life stage due to financial problems. Freddie's intellectual development would be: Freddie may find it difficult to recall things that happened in his life as the memory starts to decline in this life stage. It starts slightly in the middle age and by the age of 60 it may start to show slightly. It may find it hard to recall what did happen or what he imagined happened. This may make Freddie feel useless in a sense of way as he may get annoyed of not remembering things. Although there are many older people who recall and remember things from the pass, and third age university courses prove this. ?? ?? ?? ?? Maria Gowdy ...read more.