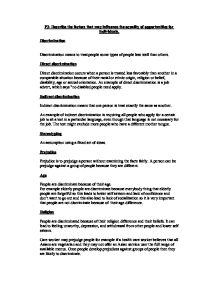 P3- Describe the factors that may influence the equality of opportunities for individuals.

For example elderly people are discriminate because everybody thing that elderly people are forgetful so this leads to lower self esteem and lack of confidence and don't want to go out and this also lead to lack of socialization so it is very important that people are not discriminate because of their age difference. Religion People are discriminated because of their religion difference and their beliefs. It can lead to feeling unworthy, depression, and withdrawal from other people and lower self esteem. Care worker may prejudge people for example if a health care worker believes that all Asians are vegetarian and they may not offer an Asian service user the full range of available menus. ...read more.