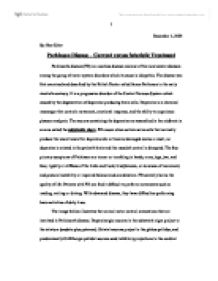 December 1, 2003 Ido Ben-Ze'ev Parkinson Disease - Current versus futuristic Treatment Parkinson's disease (PD) is a cureless disease and one of the most severe diseases among the group of motor system disorders which its cause is idiopathic. The disease was first examined and described by the British Doctor called James Parkinson in the early ninetieth centaury. It is a progressive disorder of the Central Nervous System which caused by the degeneration of dopamine producing brain cells. Dopamine is a chemical messenger that controls movement, emotional response, and the ability to experience pleasure and pain. The neurons containing the dopamine are assembled in the midbrain in an area called the substantia nigra. PD occurs when certain nerve cells that normally produce the neurotransmitter dopamine die or become damaged and as a result, no dopamine is existed in the patient's brain and the muscles' control is disrupted. The four primary symptoms of Parkinson are tremor or trembling in hands, arms, legs, jaw, and face; rigidity or stiffness of the limbs and trunk; bradykinesia, or slowness of movement; and postural instability or impaired balance and coordination. ...read more.

The common treatment is a combination of Levodopa, which is the neurotransmitter required by the brain to produce dopamine, and Carbidopa which prevents from the Levodopa to break down by the body before it reaches the brain. Once it reaches the brain, Levodopa is converted to dopamine which replaces the same substance not present in sufficient amounts in Parkinson's patients. Because of levodopa's complexities, young people with Parkinson's often start with other treatments, reserving levodopa for later in the disease; another disadvantage is that treatment with levodopa does not prevent the progressive changes of the brain typical of Parkinson's disease. For patients who suffer badly from the drug's side affects there is a treatment that is a variation of an old surgery that's available from the 1940th. This treatment called "Deep brain stimulation" (DBS). In DBS, thin electrodes are implemented deep into the brain (in the globus pallidus). The electrodes are connected by a thin wire to a generator (type of pacemaker device) which is implanted on the chest. The device sends continuous electrical pulses to the targets, blocking the impulses that cause tremors. ...read more.

The latest breakthrough was in Kentucky University when researchers have posted a prototype of a module which will use a pump in order to drip the GDNF to the brain. Embryonic stem cells from animals: Researchers are trying to develop stem cells that would turn into GDNF-producing cells when placed in the brain. A team from the National Institutes of Health in Maryland has added a gene called Nurr1 to cultured mouse embryonic stem cells and exposed them to a series of growth factors (GDNF) that caused them to develop into neurons. The researchers found that the grafted cells developed functional connections with brain cells and began to release dopamine. Although this research looks promising, it is still preliminary and the researchers need much more information about how the cells interact with the brain and about their safety before similar strategies can be tested in humans. Genetic engineering: Scientists are modifying the genetic code of individual cells to create dopamine-producing cells from other cells, such as those from the skin. Researchers found the strongest genetic link to late-onset Parkinson's on chromosome 17, which has previously been linked to other diseases. This research out of the three is the most preliminary and it's nascent. ...read more.